Is Last Light all set to premiere in September on Peacock? Continue reading to find out.

Last Light is an upcoming series that is an adaptation of Alex Scarrow’s bestselling apocalyptic thriller novel and tells the story of a family fighting to survive in a world that has been suddenly thrown into chaos. The series is the newest addition to the streaming catalog. It is fair to say that the show has gotten quite a lot of attention over the last few days as the premiere date draws closer.

It will be part of the network’s fall season, along with other new series and movies that will debut this year. If you intend to watch this new series on the platform and get a head start, we’ve put together a brief rundown of everything you need to know about the release date, plotline, and cast. Keep reading to learn more about Peacock’s Last Light.

The network has officially confirmed that Reboot is set to premiere on Thursday, September 8, 2022. Joanne Froggatt, who will play Elena Yeats, also shared the news by posting a short clip quoting, “How far would you go to save the ones you love? #LastLightPeacock is streaming September 8 on @peacocktv I can’t wait for you all to see this!” Take a look at the official post below:

According to the official description on Stan’s Website states, Petro-chemist Andy Nielsen knows how dependent the world is on oil; if something were to happen to the world’s oil supply, it would set off a chain reaction: transportation would grind to a halt, supplies would cease to be delivered, law enforcement would be overwhelmed. While on a business trip to the Middle East, Andy realizes that his worst fears are coming true, and his family is separated at this crucial moment.

His teenage daughter, Laura, is alone at home in London while his wife, Elena, and young son, Sam, are in Paris. Amid this chaos, each family member will sacrifice everything to find one another, despite the distance and the dangers that separate them. Based on Alex Scarrow’s best-selling novel of the same name.

“I was very much attracted to the backdrop in which the story is set, the oil crisis, with this beautiful family unit separated by the crisis and trying to get back together and be reunited,” Matthew Fox explains in The Hollywood Reporter article, adding that he was also keen to tackle the job alongside Entertainment 360 manager and producer Bill Choi. “He’s just become a very close, very good friend, and to have the opportunity to collaborate creatively and have our fingerprints in a story like this and shoot in many different locations, that was also attractive.”

The forthcoming series will consist of five episodes, all of which will drop on Thursday, September 8, at midnight ET. That’s fantastic news for folks living on the West Coast. However, the episodes will be released on Wednesday, September 7, at 9 p.m. PT. Each episode is approximately 40 minutes long, which is the standard duration for a TV series due to commercials. We’d also want to point out that, as of September 6, 2022, Rotten Tomatoes had confirmed the actual titles and synopsis for the episodes. We’ve included them here so you can see the sequence and schedule of the episodes.

Andy Yeats is stuck in the Middle East, separated from his family; as a global oil crisis unfolds and the world descends into chaos, his wife and young son are in Paris, and his teenage daughter is home alone in London.

Andy and Mika are hunted while they search for the cause of the global crisis; Elena and Sam try to flee France to reunite with Laura; Laura and her friend Owen grow closer, unaware that a mysterious man tracks their every step.

Andy and Mika try to get home and find answers to the chaos descending upon the world; Elena braves police and looters in Calais to get Sam his eye medication; Laura and Owen must evade the threat that seems to appear at every turn.

Andy begins working to help solve the global crisis and reveals his personal connection to its cause; Elena and Sam illegally cross from France to England, but they are captured, detained, and separated; Laura and Owen face the man following them.

Faced with the choices of his past, Andy takes on the mastermind behind the crisis to save his family and modern civilization; Elena pieces the clues together and discovers the location of the culprits.

The main cast members of the series, along with their character descriptions, are as follows:

Ross will play Laura Yeats: Laura is a passionate and informed university student committed to confronting the mounting crisis of climate change and finding a solution to helping the planet. This puts her at odds with her father, who is a scientist for big oil. Her activism, curiosity, and courage, as well as her social media savvy as an environmental influencer, will prove essential to helping her father when the world is suddenly sent into chaos due to a global energy crisis.

Fay will portray Sam Yeats: Eight-year-old Sam is fighting a degenerative eye disease that is slowly taking away his sight. His descent into darkness is happening at a time the rest of the world is facing a global energy crisis that threatens to plunge the world into darkness. He and his mother will lean on each other for support in getting through these dark days.

Revah will play Mika Bakhash: Mika’s job is to ensure energy-related compliance between big oil and the British government. When the world faces a global energy crisis, Mika will use professional contacts and investigational savvy to help Andy find a solution to the growing energy problem.

Alli will portray Owen Jones: Owen is a brilliant college student who has been working his way through school. When he gets closer to Laura, he will find himself in over his head and in the very center of the crisis.

Wlaschiha will play Karl Bergmann: Karl Bergmann works for the British Government and is the man Parliament and MI6 turn to when the world is thrown into chaos.

Jomah will portray Khalil Al-Qatani: Khalil is the head of a big oil company that is committed to moving away from its economic reliance on oil and toward a huge investment in renewable energy resources. Even as enemies within his company try to derail his progressive programs, he will assist Andy and Mika in their quest for a solution to the emerging global energy crisis.

The official trailer was released on August 17, 2022, which reflects on the plot indicating, “Your family. Your world. What if it all disappeared tomorrow? If society were collapsing, how far would you go to save the ones you love?” Take a look at the official trailer below:

Where to stream Last Light?

When released, you can watch Last Light exclusively on Peacock and Stan. The viewers can buy a subscription plan according to their preference which allows viewers to watch new episodes based on location when the episode airs worldwide. Moreover, take a look at the official poster below: 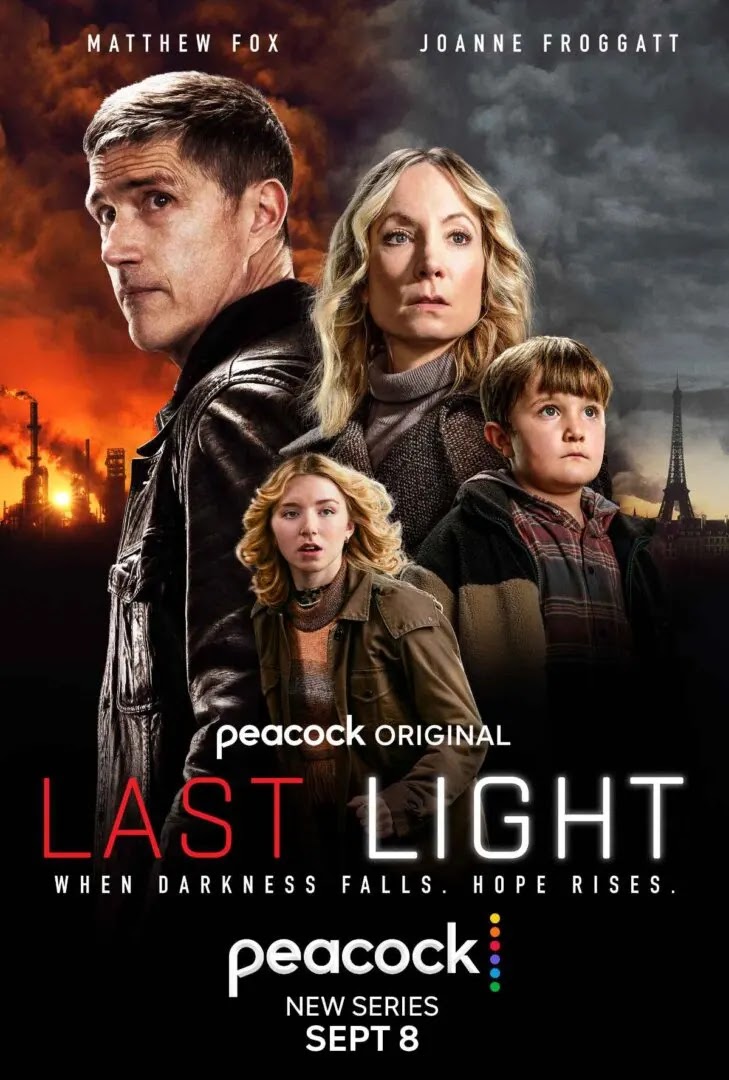 Let us know in the comments if you will be streaming Last Light on Peacock and Stan this month.