Sort Of Season 2: When will it premiere on HBO Max?

What should the fans look forward to seeing in the second season? Here is everything we know so far.

Attention fans! The wait is finally over because the anticipated second season of “Sort Of” is all set to premiere in a few weeks on HBO Max. The series is a Canadian television sitcom that follows a non-binary millennial trying to balance their roles as a child of Pakistani immigrant parents, a bartender at an LGBTQ bookstore and café, and a caregiver to the young children of a professional couple.

It is no surprise that the show is returning for another season, as the reviews indicate the show’s popularity along with the fairly good critical acclaim from the audience and critics. For the first season, Rotten Tomatoes reported an approval rating of 100% based on 8 reviews with an average rating of 8.8/10. In addition to this, it was the most nominated television series at the 10th Canadian Screen Awards in 2022, with 13 nominations.

It won the award for best comedy series. It was also shortlisted for the fan-voted Audience Choice Award. It received a Peabody Award in the Entertainment category in 2022. Furthermore, the show’s popularity among fans cannot be denied, as viewers are eager to learn and see more about these beloved characters, who deserve a proper conclusion after spending so much time understanding their arcs and plotlines.

So, if you are one of those who want to get clarity about the release date, plot, and cast among other information. Then look no further, as we’ve compiled all of the relevant information on Sort of Season 2 and other crucial details. Continue reading until you reach the end to find all of your answers.

In February 2022, the series was renewed for a second season, which premiered on November 15, 2022, on CBC Television and CBC Gem in Canada. The series will premiere with back-to-back episodes airing at the time slot of Tuesdays at 9 p.m. (9:30 NT) on CBC. In addition to this, the season will air on HBO Max in the US starting December 1, 2022. The official Twitter handle of HBO Max also shared the update among their followers, quoting, “Let love in. Season 2 of Sort Of premieres December 1 on HBO Max.” Take a look at the official post on the social media handle below:

Season 2 of Sort Of premieres December 1 on HBO Max. pic.twitter.com/iCQN7wDZ4w

Sort Of Season 2: Why was it renewed for the second season?

“We are so thrilled that we are able to dive back into the worlds of Sort Of, and to keep exploring the evolution of all our characters – including some new ones! – as they continue to investigate who they are in the world as friends, family members, lovers and human beings,” said Baig, co-creator, showrunner, executive producer, and star. “Baig and Filippo’s honest and insightful storytelling is a lesson in unraveling conventional views of identity,” said Jeniffer Kim, SVP of International Originals on HBO Max.

“We could not be more excited to partner with CBC and Sienna Films on another season of this very special show.” Said Sally Catto, General Manager of Entertainment, Factual & Sports at CBC: “Sort Of speaks to the complexity of being human with wit, warmth, and an authentic sense of inclusivity, thanks to the distinct voices of Bilal and Fab. Sort Of has struck such a powerful chord with audiences, and we are thrilled to work with HBO Max and Sienna Films on the next chapter of Sabi’s story.”

The coming-of-age story follows the journey of Sabi Mehboob (Baig), a gender-fluid millennial who straddles various identities from sexy bartender at an LGBTQ bookstore/bar to the youngest child in a large Pakistani family to the de facto parent of a downtown hipster family. Sabi feels like they’re in transition in every aspect of their life, from gender to love to sexuality to family to career. Sort Of exposes the labels we once poured ourselves into as no longer applicable – to anyone.

According to CBC, the show returns for Season 2 which describes that this is the season of love. Loving your friends, family, work, romantic love, and most importantly, self-love. Sabi decides not only are they ready for some uncomplicated romance but they also want everyone to love each other. Unfortunately, with their dad’s unexpected return from Dubai, the Kaneko-Bauers’ struggles as Bessy is released from rehab, and issues at Bar Bük, Sabi is faced with situations and relationships that are anything but simple.

The official trailer of 1:57 minutes was released by the network on November 16, 2022, with the tagline highlighting the plot and stating, “Season 2 of the award-winning series Sort Of is the season of love and the second season of the Max Original comedy series Sort Of debuts December 1 on HBO Max.” Take a look at the official trailer on the HBO Max YouTube channel below:

Sort Of Season 2 Cast and Crew

The main cast of the series includes Amanda Brugel (The Handmaid’s Tale) who joins the ensemble cast this season as Gaia, artworld doyenne and 7ven’s mother, known to crash 7ven’s world and steal her friends, along with Raymond Cham Jr. (The Big Leap) who is welcomed to the world of Sort Of as Deenzie’s offspring, Wolf. Scott Thompson (The Kids in the Hall) will appear as Bryce, a wealthy investor, and potential business partner. In addition to Baig, returning cast members include Gray Powell as Paul; Amanda Cordner as 7ven; Ellora Patnaik as Raffo; Grace Lynn Kung as Bessy; Supinder Wraich as Aqsa; Kaya Kanshiro as Violet; Aden Bedard as Henry; Cassandra James as Olympia; and Becca Blackwell as Deenzie.

This season will consist of 8 episodes with a runtime of 21 to 22 minutes per episode, just like the prior season. It will debut with the first two episodes on November 15, 2022, followed by two new episodes every Tuesday through December 6, 2022, on the CBC streaming platform, and is later expected to debut all the episodes on HBO Max on December 1, 2022.

Here is a brief episode guide to help you grasp the order and discover the plot, which will transpire into the upcoming episodes and expand the tale further to reach the best conclusion for the season.

Episode 2: Sort of 2gethr – November 15, 2022: Bessy struggles to make sense of her life; Sabi has an awkward first day on the job with Imran, before going to a club with 7ven and Arrow; Sabi wonders if Olympia will stand them up.

Episode 3: Sort of Broke – November 22, 2022: Sabi needs to get paid; Paul is blindsided when Bessy makes a big decision without telling anyone.

Episode 4: Sort of Who She Is – November 22, 2022: Imran finds it hard to deal with Raffo’s independence when she joins a weekly dance class.

Episode 5: Sort of Amsterdam – November 29, 2022: 7ven hosts a cottage weekend for Sabi, Wolf, and Arrow, which is gate-crashed by her mum.

Episode 6: Sort of I Love You – November 29, 2022: Imran makes a surprise drop-in on Sabi; Bessy and Paul discover Henry is skipping school; 7ven and Wolf try to make a deal with Gaia to invest in the new club gallery.

Episode 7: Sort of Opening – December 6, 2022: On the eve of the opening of the new club gallery, a moment between Bessy and Sabi creates tension in their relationship.

When the season is available, the fans can stream episodes of Sort Of Season 2 for free on CBC Gem and later on HBO Max with a selection of membership tiers from which they can pick according to their preferences. Moreover, membership on the platform costs $10 per month for the ad-supported plan and $15 per month for the ad-free option.

The prior season of Sort Of is also already available on the platform, which offers premium, compelling drama and comedy series, feature films, groundbreaking documentaries, and kids and family entertainment and is available to watch across all your favorite screens. 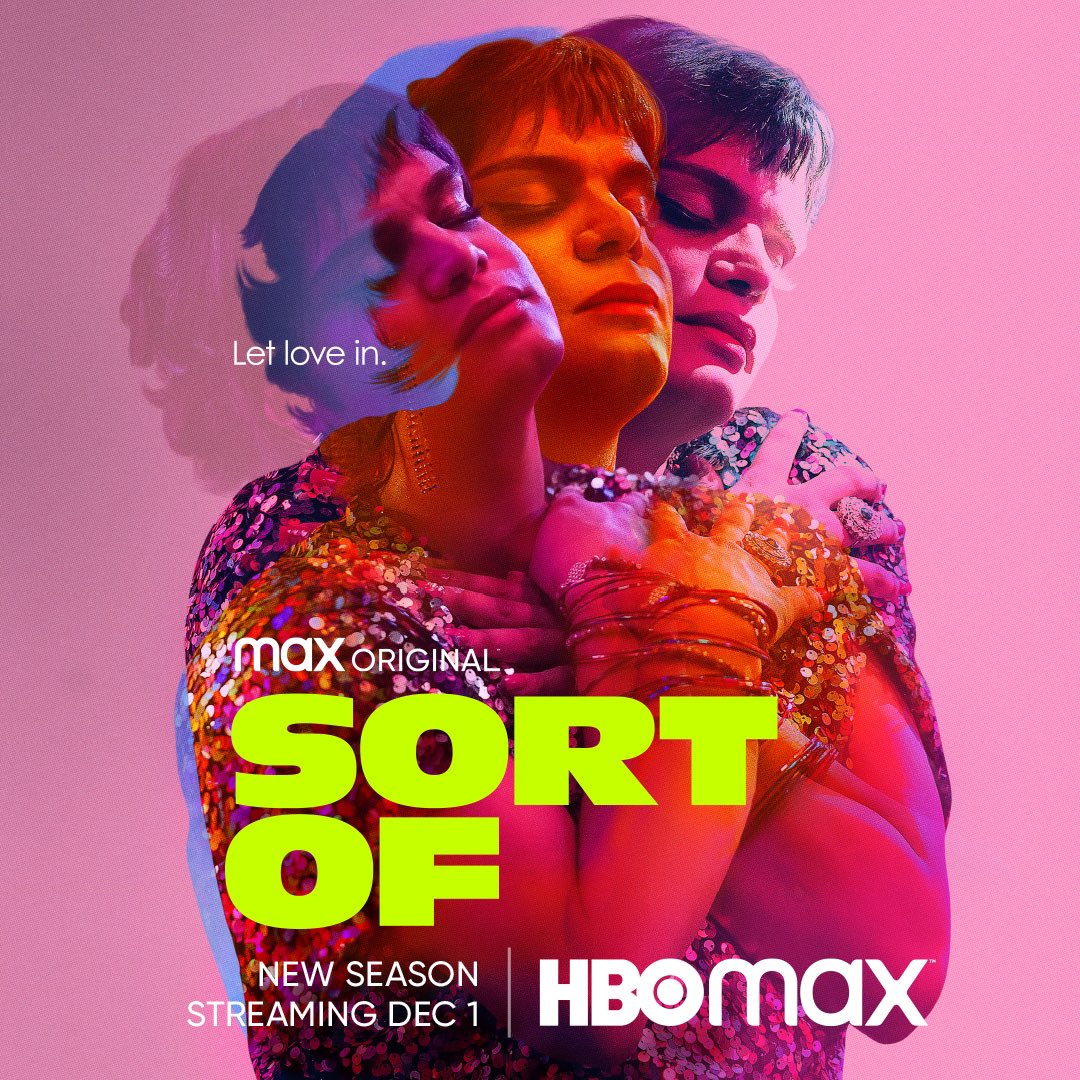 Let us know in the comments what you are looking forward to seeing in Sort Of Season 2.