Venture capitalist Bill Gurley regularly argues on Twitter that IPOs are flawed. Coupang, which priced its offering at $35 per share late on Wednesday, suggests he has a point. The shares opened on Thursday at $63.50, valuing the company at an eye-watering $109 billion. That meant IPO investors benefited from an overnight gain of 81%. And Coupang could theoretically have raised nearly twice as much as the $3.4 billion it actually added to its coffers, had it sold shares at Thursday’s opening price.

Coupang’s stock closed on Thursday at $49.25, still a 41% gain on the IPO price. The average first-day pop, as it’s known, for U.S. IPOs of operating businesses so far this year has been 46%, according to Dealogic, higher than for any full year since 2000.

The $41 billion Roblox, meanwhile, debuted on Wednesday. Its backers and boss David Baszucki chose a direct listing, a mechanism in which most or all of a company’s stock simply becomes available to trade. The shares opened at $64.50, higher than the $45 so-called reference price that the New York Stock Exchange had set. But nobody bought or sold shares at that price, so nobody gained overnight and Roblox didn’t leave cash on the table.

Bang for your Robux 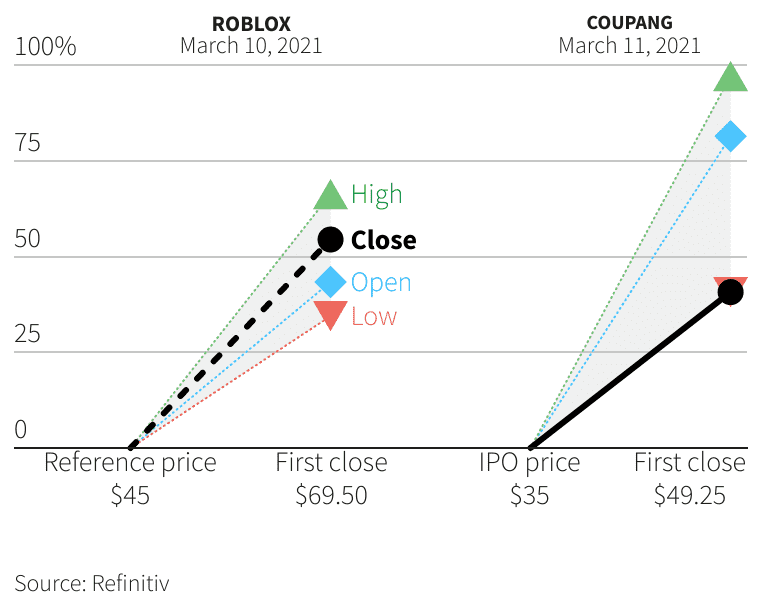 The comparison also supports the view that IPOs don’t discover a real market price. They involve the sale of a limited number of shares – in Coupang’s case, less than 8% of the total – to a narrow group of institutions selected by the offering’s Wall Street underwriter. That’s not an obvious way to match demand and supply for the entirety of a company’s stock. Coupang’s highest traded price on Thursday was 40% above the lowest, according to Refinitiv data.

For Roblox, the equivalent first-day range was a much less volatile 24%. The number and value of shares traded was more than for Coupang, despite Roblox having less than half the market value. More buyers and sellers participated, setting a more stable price. It’s the happy result, Gurley tweeted, of avoiding the “inherent conflict” of IPO underwriting.