Pieces of Her Release Date: Everything we know so far about the Netflix thriller

Netflix has come up with endless films and television projects with a continued release. The OTT platform has become a legit power player in Hollywood. It’s a huge success for the streaming platform.

Netflix is all set to release hot new content moving on and is coming up with hotter properties to Netflix, Pieces of Her is based on the dramatic thriller of the best-selling novel from Karin Slaughter.

Read on to find out more details about Pieces of Her on Netflix.

Pieces of Her Release Date

The show has worked its way to post-production and pre-existing material and some information about the series is also revealed. As per Deadline, the show is a eight-part miniseries for Netflix by writer Charlotte Stoudt, he is also the showrunner who also worked for House of Cards, Homeland, and Fosse/Verdon. Also, eight episodes are directed by Minkie Spiro who has teamed up with Stoudt on Fesso/Verdon.

The upcoming series will release all eight episodes at once. The series is all set to release on March 4, 2022.

Pieces of Her Cast

The production of the show has a stellar cast to bring out the wild story of Pieces of Her to life. The show casts Toni Collette as Laura Oliver who was also a part of Hereditary, Knives Out, and Stowaway, Bella Heathcote as Andy Oliver who was also a part of Dark Shadows, The Neon Demon, and The Man in High Castle, David Wenham as Jasper Queller, Jessica Barden as Jane who was also part of The Lobster, Penny Dreadful, and Netflix’s “The End of the F***ing, Joe Dempsie as Nick, Jacob Scipio as Michael Vargas, Omari Hardwick as Gordon Oliver, Gil Birmingham as Charlie Bass, Terry O’Quinn as Martin Queller, Calum Worthy as Jasper, Nicholas Burton as Andrew Queller, Aaron Jeffery and Mia Artemis as young Paula Kunde. 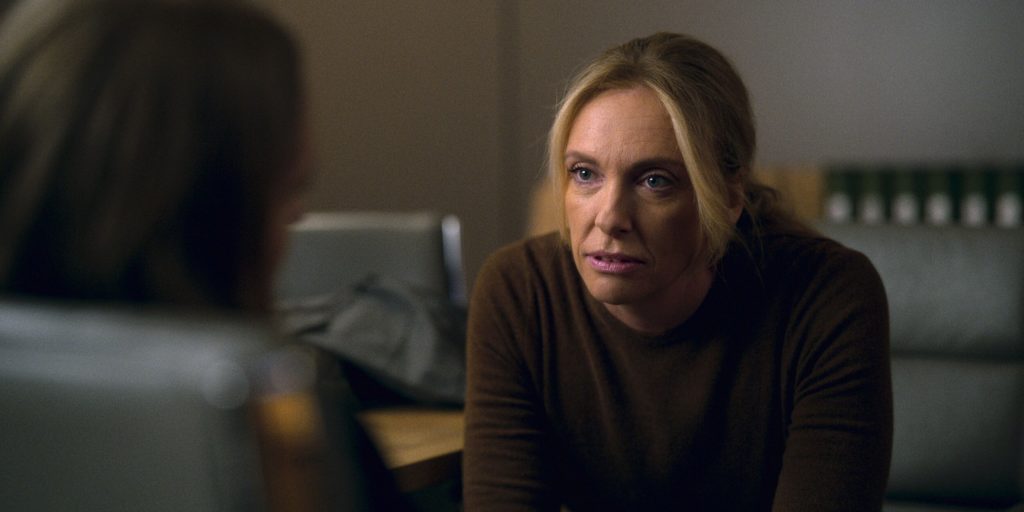 Pieces of Her Plot

The upcoming new series is, as per the report by Deadline, set in a silent town of Georgia and finds a Heathcote portraying Andy Oliver, a woman in her 30s along with her mother Laura who gets in a violent incident. Andy is shocked to see her mother like this. Andy is on a cross-country visit to uncover the dark truth about her mother and her family. It will be a long way and Olivers will likely come into contact with the billionaire Queller clan along with O’Quinn playing a tough-minded patriarch Martin. Barden will be playing Jane who is a piano prodigy desperate for freedom. Wenham will be seeing playing eldest Queller sibling Jasper in the series with Nicholas Burton appearing as Andrew Queller, a Stanford grad student who’s best-buddies with Nick.

Netflix’s official synopsis reads, “A woman pieces together her mother’s dark past after a violent attack in their small town brings hidden threats and deadly secrets to light.”

All the stories will ply in a mystery to those who haven’t read the novel. The fascinating setup is indeed a mystery that will ascertain you unthinkable, hope you do not get wrapped up in it.

No official trailer is released by Netflix yet.