The Stage at SXSW 2022: Shawn Mendes, Gunna and others to perform at the Samsung Galaxy + Billboard event

With the slight of flattening of the COVID-19 curve, concerts are happening again giving fans a fair chance to enjoy and see their favorite artists live. These precious moments not only help generate money for charity but also bring celebrities closer to their fans.

Billboard and Samsung Galaxy have decided to pool in money and bring forth an amazing concert night. The venture announced on February 18, 2022 that they will collaborate on an amazing performance show for SXSW 2022.

The Samsung + Billboard Present The Stage at SXSW event will take place March 17-19 at the Moody Amphitheater at Waterloo Park in Austin, Texas. The venue so far is being described as the city’s newest outdoor live music venue. According to the announcement made by Billboard, the event will include three consecutive evenings of high-profile performers.

The concert series gets off with Gunna and Young Thug on Thursday, March 17, and Palm Tree Crew presents Kygo on Friday, March 18, with Frank Walker and Forester as support. On Saturday, March 19, Shawn Mendes and Sebastian Yatra will round up the three-day festival. Attendees may enjoy DJ Rosegold and DJ VRYWVY’s performances throughout the three evenings. 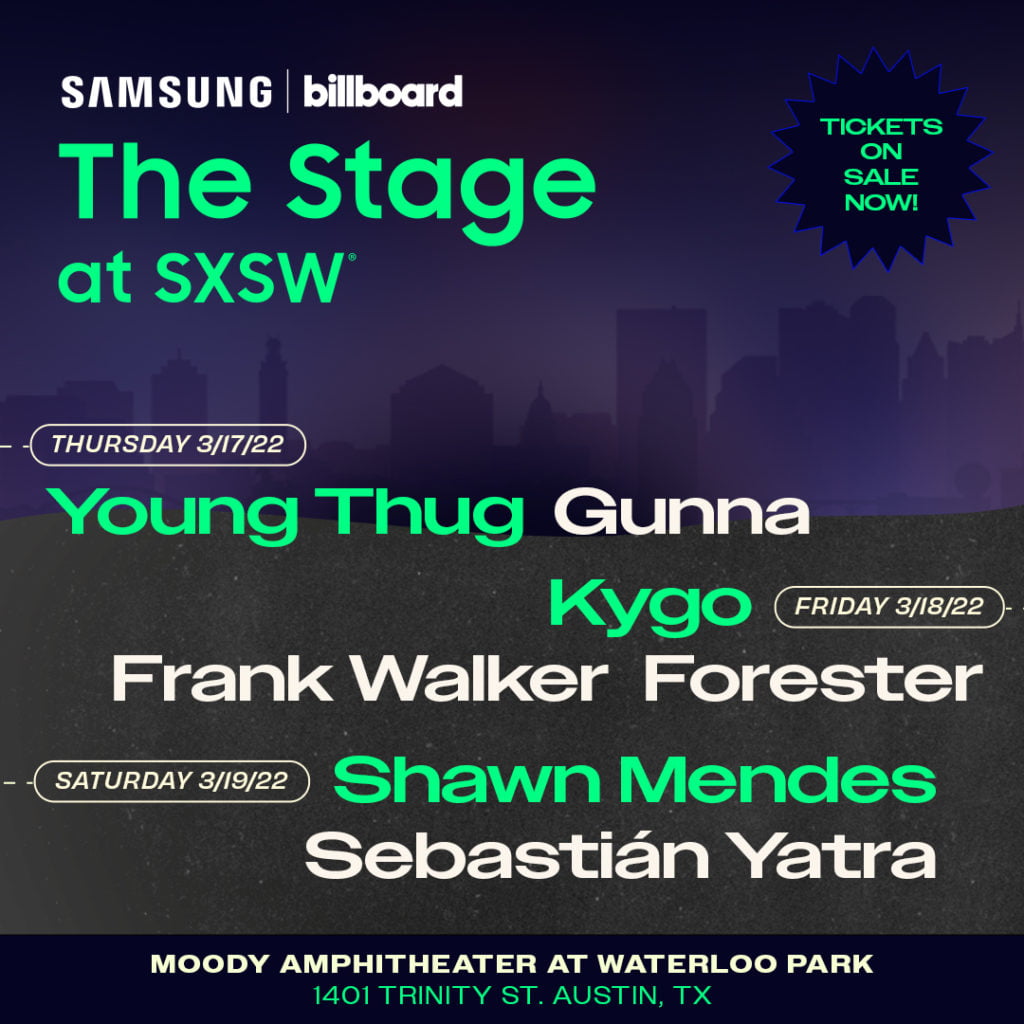 Samsung Galaxy is the event’s title sponsor. In fact  it will be hosting the Friday and Saturday events exclusively. At SXSW, the Samsung and  Billboard Galaxy House will provide attendees with the opportunity to participate in engaging content and products  and interact with Samsung products on-site, including the all-new Samsung Galaxy S22, as well as brand row activation, pop-up moments, artist gifting, and consumer touch points at concerts.

Billboard will donate a percentage of ticket profits to the Waterloo Greenway Conservancy, a nonprofit group working with the city of Austin to develop an urban park system. The first of the organization’s three phases, Waterloo Park, opened in 2021 and has 11 acres of downtown green space, community activities, and the Moody Amphitheater, which hosts performing arts and entertainment.

Existing SXSW music and platinum badge holders, as well as SXSW Music Festival wristband holders, will be able to purchase a limited number of tickets for the three-night music extravaganza. SXSW Music Badges, Platinum Badges, and Music Festival Wristbands will be available on a first-come, first-served basis, subject to capacity. Starting today, a limited quantity of tickets are available to the general public. The tickets are available on ticketmaster.com.

Billboard will be live-blogging from SXSW this year, which runs from March 11 to March 20, so be sure to check Billboard.com and follow @billboard on Instagram and Twitter for the latest updates.

PMC is SXSW’s largest stakeholder, with its brands serving as official media partners for the concert.