It goes without saying that the most beautiful yet complicated bond is between a father and his child. And as you grow old, it just strengthens. While many celebrated the first man of their lives yesterday on Father’s Day, Hollywood couldn’t keep calm. Several celebrities took to social media to share their feelings about their father and the father of their children.

If you think you missed that out, here’s how Hollywood celebrated 2022 Father’s Day.

Priyanka Chopra Jonas gifted her daughter Malti Marie and Nick Jonas, her husband and father to her daughter, matching sneakers as it was the singer’s first father’s day. She went on to share a beautiful picture of the father-daughter duo wearing the gifted sneakers.

“Happy 1st Father’s Day my love. To watch you with our little girl is my greatest joy..what an amazing day to come back home… I love you.. here’s to many more,” she wrote.

Gigi Hadid wishes her ex-boyfriend and father of her daughter Zayn Malik a happy father’s day by posting up a picture of Khai and him on her Instagram story. The picture read a caption, “& to Khai’s baba!!!!”. Zayn Malik and Gigi Hadid broke up in October 2021. She also posted a picture with her father wishing the same.

Cardi B surprised Offset with a delicious and huge breakfast in bed. She brought the breakfast in a huge tray that consisted of tasty dishes including eggs, chicken, bacon, pancakes, fruits, and whatnot. She showed her appreciation towards him by setting up a ton of balloons that read Happy Father’s Day and spoiling him with gifts from all of his kids. Four out of his five kids were present at the time of the celebration, including Jordan, Watson, Kalea, and Kulture. Offset was quite astonished and happy seeing the gestures made by his wife. 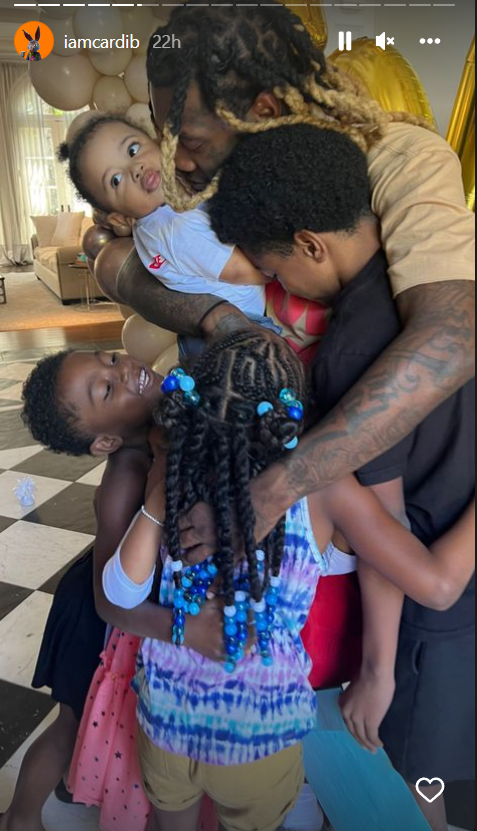 Kim Kardashian gave a shout-out to her ex-husband Kanye West, who is the father of her four kids, which includes North, Chicago, Saint, and Psalm, by sharing a couple of photos of him with the kids with the caption, “Thank you for being the best dad to our babies and loving them the way you do! Happy Father’s Day Ye”. Kim also posted pictures thanking Caitlyn Jenner for being the best stepdad and also wishing her birth father, the late Robert Kardashian.

Katherine Schwarzenegger posted pictures of her dad Arnold Schwarzenegger and her husband, Chris Pratt, wished them on occasion. The caption read, “My guys! Happy Father’s Day to my wonderful dad/fun-filled Opa, and to my amazing and loving husband. I am so grateful. We are all so lucky to have you both!”

Chris Pratt was also seen out and about with his two daughters, Lyla and Eloise, and his wife, Katherine Schwarzenegger.