Is White Noise premiering on Netflix in 2022?

Is White Noise premiering this year? Here is everything we know so far.

A brand-new teaser trailer for the movie has been released just one week before White Noise, directed by Noah Baumbach of Marriage Story, opens the 79th Venice Film Festival on August 31. The teaser gives glimpses of White Noise which is an upcoming apocalyptic action film written and directed by Noah Baumbach, adapted from the 1985 novel of the same name by Don DeLillo. It is Baumbach’s eleventh narrative feature film and the first not to be based on an original story of his own.

Jack Gladney, professor of Hitler studies at The-College-on-the-Hill, husband to Babette, and father to four children/stepchildren, is torn asunder by “the Airborne Toxic Event”, a cataclysmic train accident that casts chemical waste over his town. If you are interested in watching the movie, then you have reached the right place as we’ve compiled a list of all the things you should look forward to when it is available to watch on the streaming platform. Continue reading to learn more about White Noise.

White Noise will open the 79th Venice International Film Festival on August 31, 2022, making it the first Netflix original film to do so. It is scheduled to be released in select theatres and on the streaming service in 2022. The official release date for the film’s debut on Netflix has not been released as of August 30, 2022. But it is expected to be released on Netflix later in 2022. The approximate runtime is reported to be 136 minutes.

Viewers should keep a close eye on such updates on the official movie’s social media; quote, “You can’t hear it if it’s everywhere. Adam Driver, Greta Gerwig, and Don Cheadle star in White Noise — a film by Noah Baumbach, based on the book by Don DeLillo. Coming soon to select theaters and Netflix.” Take a look at the official post below:

You can’t hear it if it’s everywhere.

Adam Driver, Greta Gerwig, and Don Cheadle star in White Noise — a film by Noah Baumbach, based on the book by Don DeLillo. Coming soon to select theaters and Netflix. pic.twitter.com/Z1tZ65PNHi

According to the official Netflix press release, the movie follows at once hilarious and horrifying, lyrical and absurd, ordinary and apocalyptic, White Noise dramatizes a contemporary American family’s attempts to deal with the mundane conflicts of everyday life while grappling with the universal mysteries of love, death, and the possibility of happiness in an uncertain world. Based on the book by Don DeLillo, written for the screen and directed by Noah Baumbach, produced by Noah Baumbach (p.g.a) and David Heyman (p.g.a.). Produced by Uri Singer.

“Noah Baumbach’s adaptation of White Noise is an unequivocal triumph: a wildly entertaining and morbidly funny meditation on the way we live now that is also the director’s most ambitious and expansive film,” says Dennis Lim, artistic director at NYFF. “Aided by a brilliant cast led by Adam Driver and Greta Gerwig, Baumbach has not only captured the essence of Don DeLillo’s beloved, era-defining book — he has turned it into a movie that speaks profoundly to our moment.”

The official teaser was released on August 25, 2022, on the Netflix youtube channel with a tagline stating, “Based on the book by Don DeLillo, a film by Noah Baumbach, starring Adam Driver and Greta Gerwig, WHITE NOISE coming soon to select theaters and Netflix.” Take a look at the official trailer below:

In the trailer, the viewers get to see Baumbach’s interpretation of White Noise’s triggering event—a chemical accident that unleashes a toxic cloud that hangs over the plot and its characters— is displayed appropriately in the enigmatic trailer for the movie. Jack Gladney (Adam Driver), a professor of “Hitler Studies,” is at the center of the cloud, debating issues such as life, death, and even more minute considerations of daily living. As the poisoned world around him becomes increasingly uncertain, Jack tries for happiness with his wife, Babette (Greta Gerwig), and their four children. 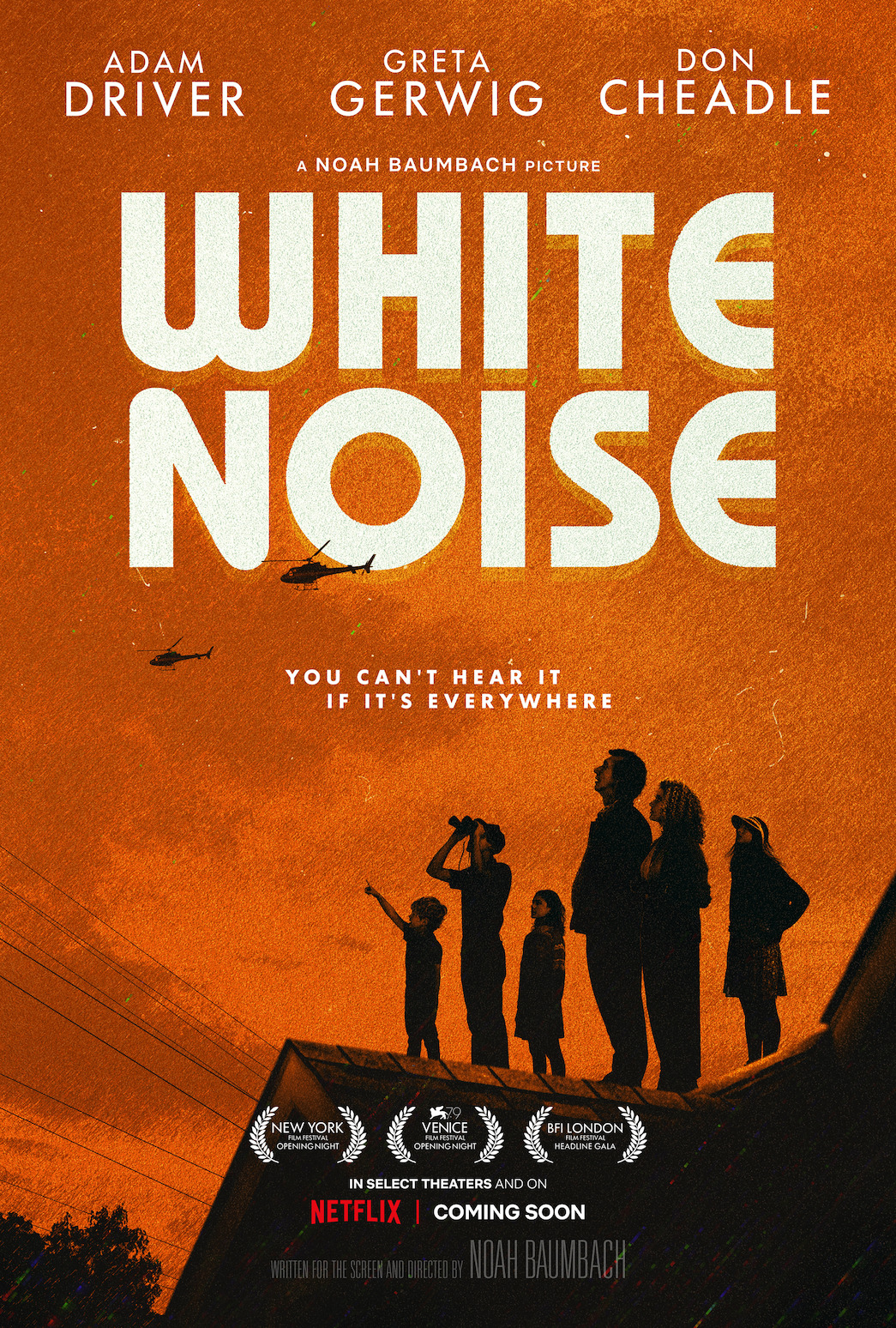 Let us know in the comments if you’ll be streaming White Noise on Netflix this fall.