Kim Kardashian trolls her sister Kylie Jenner for THIS reason

Kim Kardashian is currently going big on creating awareness for her brand. That is why she was quick to react when her younger sister Kylie donned a SKIMS wear without tagging the official brand! So, what exactly happened? Talking about Jenner, the 25-year-old makeup mogul recently shared a few hot photos of herself on her Instagram account. She looked stunning while donning a black sleeveless romper teamed up with a cut-out at the back. The diva paired it with high black boots.

Check out the pictures below.

What was Kylie’s mistake?

Kylie Jenner did not forget to caption the sultry images, as she wrote, “Kyventures.” Well, she seemingly referred to the background of all the pictures, which seemed to be a green outdoor field.

There is no denying that the post’s comment section was filled with several emojis. However, leading the comments was none other than her elder sister Kim, who noticed that Kylie had worn SKIMS clothing but unfortunately, failed to tag the brand! 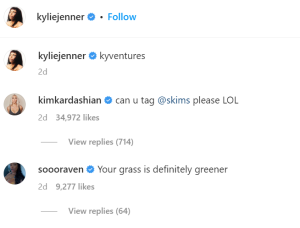 Kylie Jenner recently channeled her classic Hollywood glamour that left her fans in awe of her beauty. The reality mogul looked charming in voluminous curls and red lips as she posed for her beauty brand Kylie Cosmetics. According to Hola, Kylie’s brand posted several pictures on her official Instagram account. The pictures feature the supermodel as she wore a winged liner rhinestone choker teamed up with a white gown and a classic matte red shade of lipstick to complement her look. Here is what the caption read, “Once a glam girl, always a glam girl.”

Kylie Jenner and Travis Scott, have reportedly parted ways for the second consecutive time. For the unversed, the couple earlier revived their relationship in February 2020. The Kylie Cosmetics founder who often grabs headlines for her glitz and glamor-filled lifestyle shares two children – a daughter named Stormi and a one-year-old son with the rapper. According to a report by Us Weekly, the couple separated over Christmas with the reality star heading to Aspen, Colorado, with her children, sans Scott.