Bludgeoned with a slew of criticisms coming from the social media judge is Kylie Jenner for her decision to take her private jet on a flight that lasted for no more than 17 minutes. When the 24-year-old businesswoman and the Life of Kylie star posted on Instagram a picture of her and her husband Travis Scott, captioning it with ‘you wanna take mine or yours?’, the Twitterati apparently decided to take the flight of the climate crisis, that is exacerbating day by day, due to the environmental pollution. 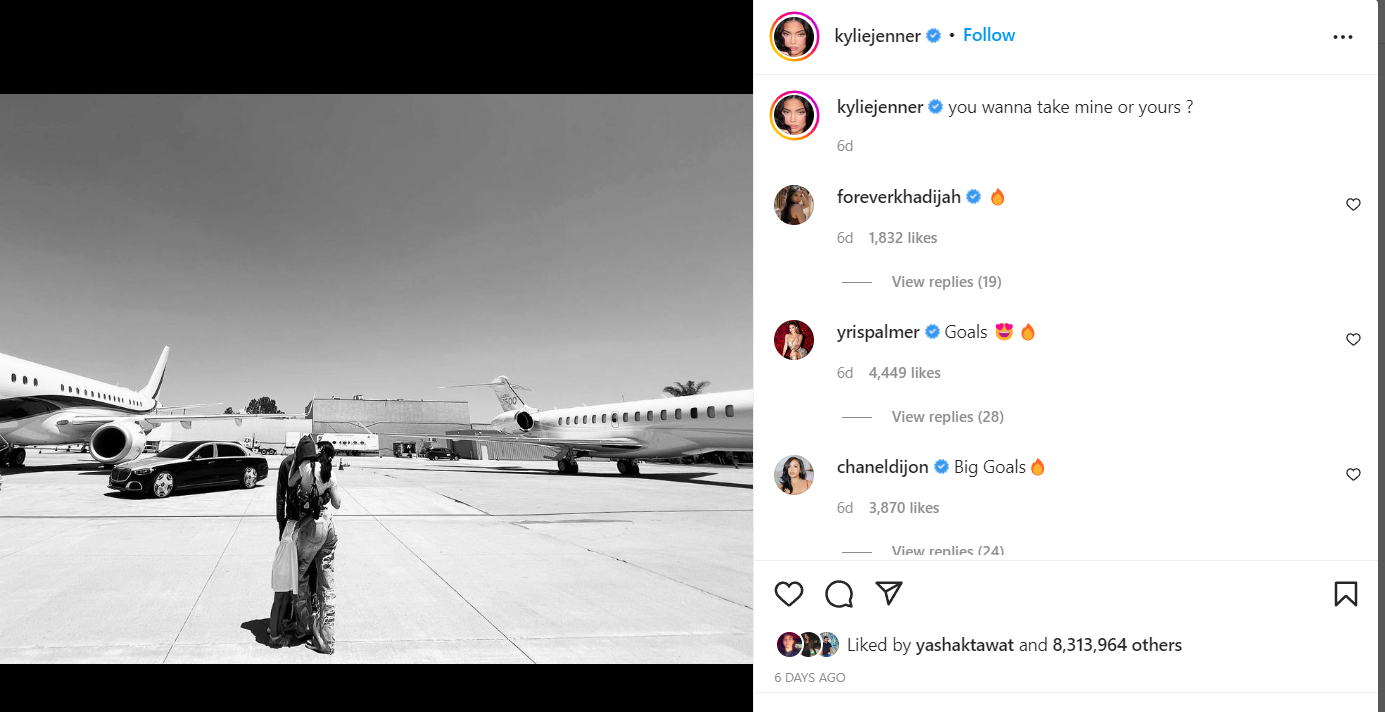 The details regarding Kylie Jenner’s flight were extolled from an automated Twitter account that keeps tabs on celebrity flights modelled on transponders and tail fin markings. According to this automated account, on July 12, Jenner’s flight lasted for about 17 minutes, travelling from Van Nuys in Los Angeles to the nearby town of Camarillo. Previously, she had travelled for 27 minutes in her jet, which is a $72m Bombardier BD 700, to Van Nuys from Thermal California.

Kylie Jenner’s lap of luxury, or leap of luxury, in this case, was bombarded with a litany of criticisms on Twitter where the netizens highlighted her ‘absolute disregard for the plant’ and for being a ‘full-time climate criminal’. Despite the worsening climate conditions, it seems that the rich and the opulent have disregarded their duties and responsibilities towards the planet.

The creator of the Celebrity Jets account, Jack Sweeney, said, “I’m not surprised people are upset, they are right to be mad at this.”

You wanna know what's the worst part of this Kylie Jenner short flight news. Her aircraft N810KJ is on the FAA LADD list, which means she's trying to hide from being tracked. But yet she's posting pictures of the plane????

However, this is not the first time that Jenner has flaunted her opulence through shorter flights. She had taken a nine-minute flight between the same two locations in June. Be that as it may, KUWTK star is not the only one infamous for short flights and total disregard for the burgeoning climate crisis.

According to the review of the Celebrity Jets tracking account, the Hotline Bling singer Drake had taken an 18-minute flight from Hamilton, Ontario to Toronto. The country music singer, Kenny Chasney and Mark Wahlberg had also taken shorter flights that lasted approximately 20-23 minutes. One of the many reasons why celebrities and business hotshots opt for brief flights is the parking convenience that cost fewer expenses. Be that as it may, there are more irrational reasons why people opt for flight jaunts, which would require a bigger space than this article to enumerate.

Sweeney also has a similar account that keeps track of the head of Tesla, Elon Musk’s flight excursions. According to the account, Musk took a 28-minute flight in his jet in May, between Houston and Austin. However, Sweeney rationalises the head’s jaunt as a way to reach the place ‘as quick as possible’.

According to a study in 2016, private jets are responsible for 4% of aviation emissions. According to a Science Direct study, titled The global scale, distribution and growth of aviation: Implications for climate change, these private aircrafts emit more than 33m tonnes of greenhouse gases, exceeding the total emission of Denmark. They exacerbate the climate situation since they carry a handful of people, polluting 14 times more than commercial planes.