The Kardashians and the Jenners always remain in the headlines for one reason or the other – be it for some controversy or because of their quirky fashionable appearances. The best part about the family is that each of them, including Kim Kardashian, Kourtney Kardashian, Khloe Kardashian, Kylie Jenner, and Kendall Jenner know the definition of fashion. Whenever the divas step outside, they always make sure to put on their best outfits. Recently, Kylie Jenner is grabbing the limelight with her latest looks.

Recently, Kylie Jenner took to her Instagram handle and shared a series of photos from an event and there is no denying that most fans couldn’t stop themselves from gazing at the diva’s beauty. Sharing the photos, she also added an amazing caption that reads, “going up?” While in another caption, she wrote, “love you mean it.”

In the pictures, the reality show mogul can be seen wearing a black-colored sheer outfit with floral embroidery all over it. We can’t stop but marvel at the outfit’s featured cut-out detailing. However, what caught everyone’s attention is that Kylie covered half of her body with a black lacy bra and a thong. The diva also flaunted her hourglass figure through the outfit, which absolutely took everyone’s breath away. She also added an oversized black bomber leather jacket to compliment her during the winter season. 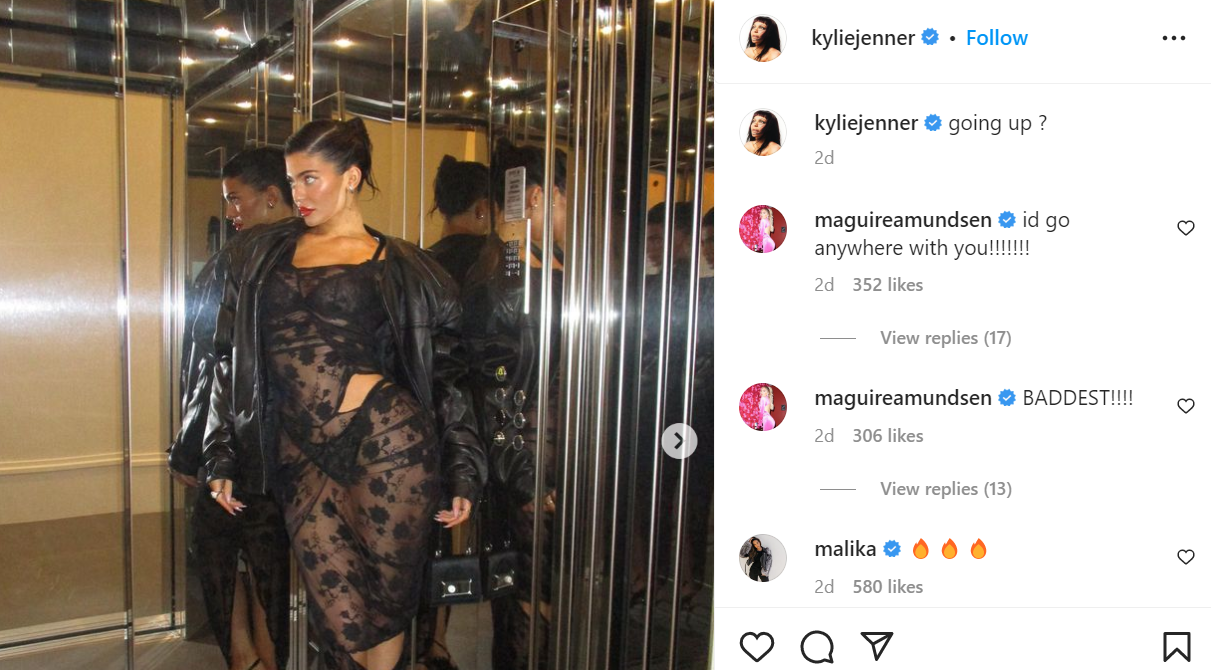 The look that won hearts

Kylie opted for glossy makeup and put on a full-coverage foundation with contoured cheekbones. She also had a flush of color on her cheeks with highlights and defined brows, and she completed the look with gloss eyeshadow, winged liner, mascara, and red glossy lipstick. The Kardashian star brushed back her hair and made it into a sleek bun. She also wore a pair of small hoops, finger rings, and black pump heels.

Kylie Jenner never fails to keep her fans updated through her social media posts and the recent instance is proof! It is because the beauty mogul and her best friend Anastasia ‘Stassie’ Karanikolaou were spotted together recently, and their snaps are already viral on the internet!

The two of them put on a playful show and even pretended to kiss during one of their holiday parties for Stassie’s vodka brand called Sunny. The party was reportedly organized this Saturday.