Money Heist: Korea Joint Economic Area Part 2: When will it release on Netflix?

When will Money Heist: Korea Joint Economic Area Part 2 premiere on Netflix? Here is everything we know so far.

As the thieves overtake the mint of a unified Korea. With hostages trapped inside, the police must stop them – as well as the shadowy mastermind behind it all. We all know that, Money Heist: Korea – Joint Economic Area is a South Korean television series and the second series in the Money Heist franchise, based on the original Spanish series.

Usually, it is rare to see any other adaptation of the original franchise being as loved and adored by viewers worldwide but the case here is in favor of this series. It is no surprise that the demand for part two is already been so high as it show featured in Global Top 10 weekly list of the most-watched international Netflix TV shows.

The series has topped the list with 33,740,000 viewing hours in the first week. Additionally, it ranked first in the Top-10 list of 51 countries. As a result, it’s easy to see why the forthcoming episodes has heightened the expectations and captivated the interest of fans who tuned in to watch the previous seasons and see what happens in the third season. Especially for you, we’ve compiled a quick rundown of everything you need to know about the official release date, plot, and cast, among others, before the premiere.

Continue reading to find out all the details about the second part.

The brand new episodes, which will be the second season of “Money Heist: Korea Joint Economic Area,” has officially been confirmed to premiere next month on Friday, December 9, 2022, at 12:00 a.m. (PT) or 3:00 a.m. (ET), at the same premiere time as other shows on the streaming service.

In order to receive updates on when the new parts of the series premiere on Netflix, interested viewers can also enable notifications. The official Netflix Golden Twitter handle also confirmed the news by sharing the date announcement for the series, quoting, “mark your calendars: Money Heist: Korea – Joint Economic Area Part 2 comes December 9, only on Netflix.”

According to Netflix Tudum, the next part of the Korean remake of the beloved Spanish series La Casa de Papel sees North and South Korea on the verge of peaceful unification – with preparations to print a new unified currency. But it wouldn’t be Money Heist if there wasn’t a crew of robbers from the North and South ready to steal the new cash straight from the mint, now would it?

Remember: No matter what scrapes they face, they all “plan on escaping, amid the chaos.” Fans will find Hahoe mask-wearing burglars carrying out the Professor’s master plan, as he is going to “let the world know who the real thieves are.” Even if everything is falling apart and the authorities are closing in on them in Part 2, the illustrious thieves assembled by the Professor have one final chance to escape when the series returns. 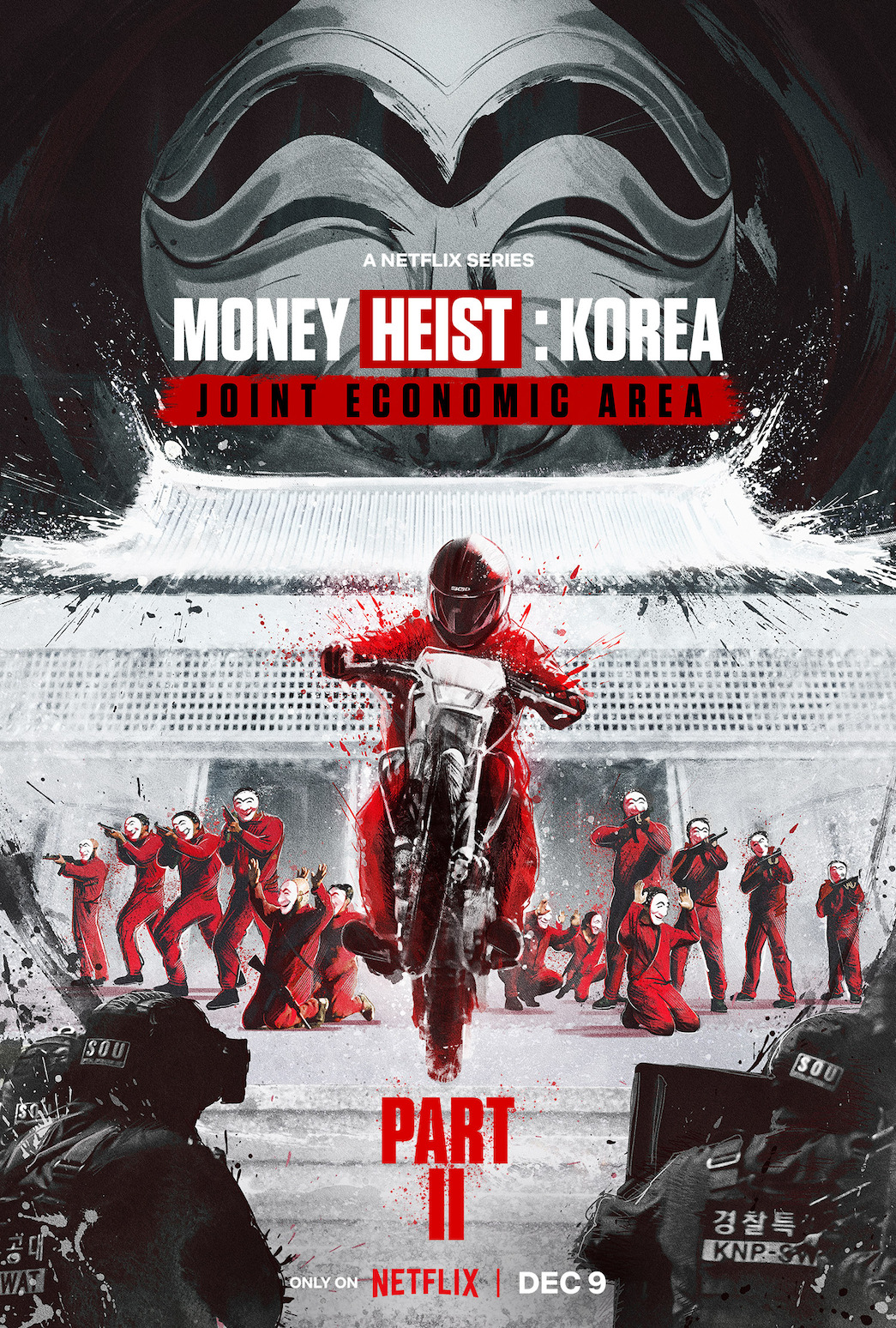 The series hails from BH Entertainment and Zium Content. The series is directed by Kim Hong-Sun (Voice, Black) and the Korean cast was compared by drawing the similarities and differences between the original and the adaptation which stars Ji-tae (Old Boy, Healer) as the Professor, Kim Yunjin (Shiri, Lost) as Inspector Seon Woojin, Park Hae-soo (Squid Game, Prison Playbook) as Berlin and Jun Jong-seo (Call, Burning) as Tokyo. Lim Ji Yeon will play a new character that is unique to Money Heist: Korea – JEA, Seoul. In the teaser, Seoul is asked, “You heard about us from the Professor, right?” We’ll just have to wait until December to learn more about her mysterious origins.

The upcoming series will have a total of 6 episodes with an average runtime of 63 to 78 minutes, which will drop at once, so you can binge it instantly! On the other hand, the episode titles and synopsis of the series are not released by the network as of November 25, 2022. The network will publish those details when the episodes are due to air on the streaming service. So, we would advise fans to be patient while waiting for these updates, which will be issued in the coming days.

All the new episodes of Money Heist: Korea Joint Economic Area Part 2, along with the prior episodes, will be available exclusively on Netflix with a range of membership options. The basic membership starts at $9.99/month, and the standard membership starts at $15.49/month. You may stream movies and TV shows at no additional cost with any of their services, depending on the package you choose. You may also play mobile games on the platform.

A complete trailer of 1:52 minutes for the new episodes was released on November 23, 2022, which gives a brief insight into the new episodes stating, “Did you think all the Professor’s (Yoo Ji-tae) scheming was over after Money Heist: Korea – Joint Economic Area in part one was going good or not?” In addition to this, the tagline for the trailer follows, “When everything falls apart, The real plan starts. Perfect, down to the very last detail. Intense, more than ever before.” Take a look at the official trailer for the series below:

The sixth episode, simply titled as, “Episode 6,” is directed by Kim Hong-sun and written by Ryu Yong-jae, Kim Hwan-chae, and Choe Sung-jun. In the episode, the viewers got to see that, Police believe Chul-woo was killed after hearing a gunshot through a wiretap (it is revealed that Berlin showed up and shot him down before he could kill Tokyo). As public opinion appears to be what the heist team values most, Woo-jin comes up with a strategy to use media attention to turn the public against them.

To reassure the hostages’ families, they haggle for Woo-jin to enter carrying a camera and broadcast every face of the still-alive hostages. Berlin gathers the hostages and lets Woo-jin in to make sure they are safe before revealing his true identity as Song Jung-ho. Using the false identity of a recently hired security guard, Woo-jin informs the public that the “hostage,” Chul-woo, is missing and presumed dead, which Anne and Young-min both confirm. She takes the opportunity to demand the release of the students on the grounds that the heist team broke their promise not to harm the hostages, which incites the audience’s anger at the heist team.

Berlin, however, reveals that Chul-woo was still alive because, at the time of the shooting, he was sporting a vest. The professor sent press reports with CCTV footage of Chul-woo’s actions after overhearing the police and their strategy. Berlin accuses the police of only wanting to save Anne (because of her father’s political background) and not the other hostages, and of using Chul-woo to put their safety in danger. Woo-jin leaves the Mint in defeat after Berlin claims that this shows the heist team only wanted money and never intended to harm the hostages.

This further fuels the public’s rage against the police and the government. Denver has sex with Mi-seon after essentially bidding her farewell earlier in the mission as the heist team gets closer to finishing their job. A distressed Woo-jin goes on a date with the Professor, who discovers his love for Woo-jin, while Moo-hyuk resigns on the outside. When Woo-jin discovers a covert message left by Anne, this date is abruptly ended. As the Professor returns to his café, he comes face-to-face with Moo-hyuk, who earlier suspected him.

Let us know in the comments if you will be streaming the new part on Netflix or not.