Moonhaven Season 2: Is it renewed or canceled?

Is Moonhaven returning for another season? Continue reading to find out more about Moonhaven Season 2.

The sci-fi thriller Moonhaven is all set to be released for a second season. The show has become its number one most-watched AMC+ exclusive series and the most-watched new series in the streamer’s history, behind Dark Winds. Peter Ocko, the creator and showrunner of the series, has created an intriguing environment that has made it possible for the viewers to get to see something different in this genre and intrigue them to want more as the show has the potential to offer something unique with more chapters and character arcs.

Following the anticipation of the viewers to know whether the show would be renewed or not, it now seems that the fans’ wait won’t last too long because we have some exciting news to offer! So that you may get a head start on the upcoming chapter and be ready before the series premieres. Here is a concise summary of all you need to know about the likely release date, storyline, and cast of Moonhaven Season 2.

Will there be a second season of Moonhaven?

Yes, it’s official that AMC+ has renewed Moonhaven for a second season in July 2022, which will consist of 6 episodes with a runtime of 45 to 50 minutes, just like the first season. The renewal updates come before the release of the finale episode of Moonhaven Season 1, which is set to premiere on August 4, 2022. The news was also confirmed on the official Twitter handle of the show, quoting, “Back to the moon. #Moonhaven renewed for a 2nd season on AMC+.” Take a look at the post below:

Back to the moon.#Moonhaven renewed for a 2nd season on AMC+. pic.twitter.com/6sVxH2Ymkx

According to the official press release on the AMC Networks website, the executive producer Ocko expressed his thoughts, “I couldn’t be more excited to return to the Moon and continue our story with this amazing cast and crew.” Further adding, “AMC+ has been a wonderful partner in bringing our world to life, and we can’t wait to continue the journey.”

“This is such an engaging and entertaining series, brilliantly conceived and run by Peter. The story is suspenseful, provocative, and prescient, and features a phenomenal cast that delivers mesmerizing performances,” added Dan McDermott, president of entertainment and AMC Studios for AMC Networks. “What Peter and the team are crafting for season two is next level, and the fans will be thrilled.”

Moreover, Ayelet Zurer, who plays Maite Voss, also shared a post on her official Instagram handle, quoting, “@amcplus announced that #MOONHAVEN is going for season 2!!! I can almost eat my cat!!!#also new episode just dropped congrats to everyone. But mostly to @rockoockoScyonara #moonhavenseries #scifi #seasontwo” Take a look at the post below: 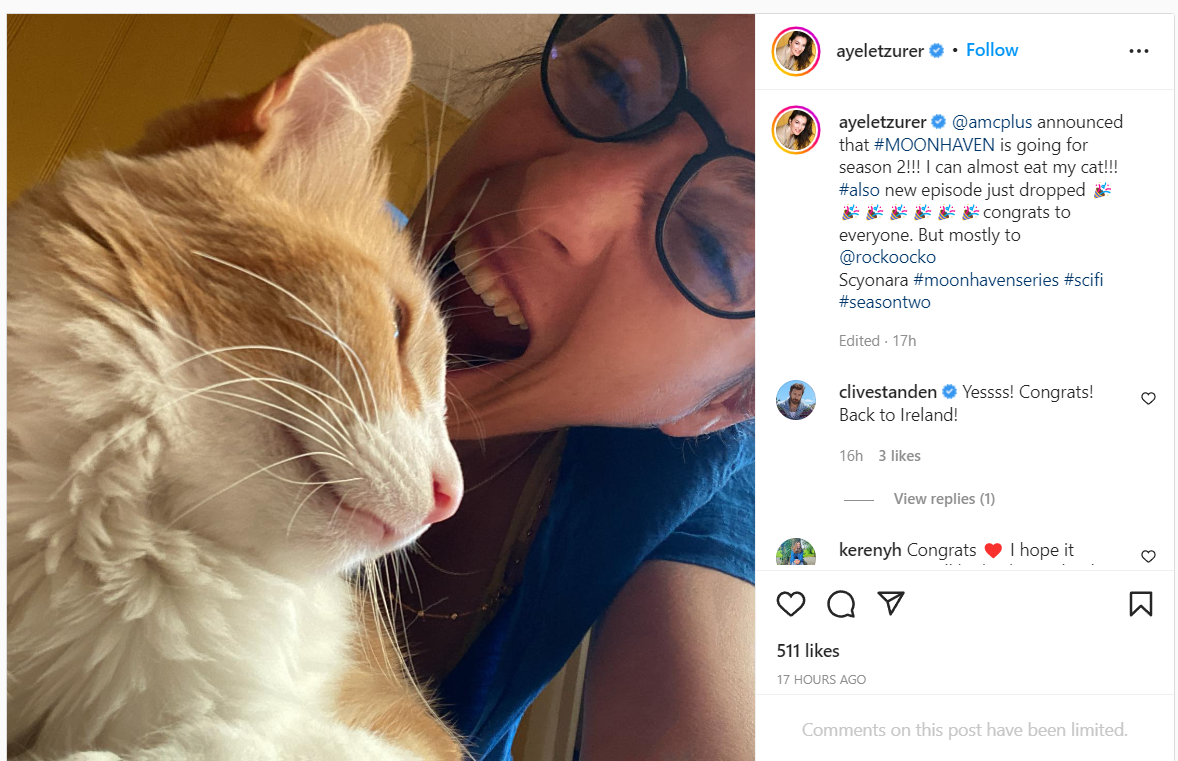 The exact release date of Moonhaven Season 2 is yet to be confirmed by AMC+ as of July 29, 2022, because the series was renewed just a few hours ago. But on the bright side, the next season is speculated to begin the production in a scheduled manner like the last season. So, the fans seem to be assured that the upcoming season is not delayed and will be released sooner than they anticipated, as the renewal announcement was made by the network on time.

If we were to guess, we’d say the release date would be between early to mid-2023. Based on the previous season’s release date pattern, the series’ rollout most likely, begins sometime around July 2023. Furthermore, we would want to emphasize that this is all guesswork at this time. As a result, the AMC+ will publish and confirm the official release dates in the following months, which fans should keep an eye on.

The official description states that the show is set 100 years in the future; the suspenseful thrill ride of a series follows Bella Sway (McDonald), a lunar cargo pilot and smuggler who finds herself accused of a crime and marooned on Moonhaven, a utopian community on a 500-square-mile Garden of Eden built on the moon to find solutions to the problems that will soon end civilization on Mother Earth. A skeptic in paradise, Bella is sucked into a conspiracy to gain control of the artificial intelligence responsible for Moonhaven’s miracles and teams with a local detective, Paul Sereno (Monaghan), to stop the forces that want to destroy Earth’s last hope before they are destroyed themselves. Tom Schultz (Manganiello), an ex-military with a philosophical bent, is the right hand of the lead Earth diplomat to the moon, who finds his ambitions changed when he’s injected with a mind-altering moon drug.

Since the network has not yet broadcast the finale episode of the first season, The Seeker, set to release on August 04, 2022. Hence, we are unable to predict the specific plotlines because we are unsure of how season one will end. However, it’s been predicted that the upcoming season would pick up any cliffhangers and subplots and jump directly into this realm, offering viewers something new to consider as opposed to the usual themes. Fans have been drawn to watch the series when it airs on television or through a streaming service because many of the episodes have garnered positive reviews from viewers. It will be intriguing to see how they make season two even more appealing and interesting.

It is anticipated that the original actors will return and continue the plot in the upcoming season. Additionally, as of July 29, 2022, the network had not yet made any major casting announcements. The following is a list of the series’ notable characters:

The network hadn’t released any trailers or teasers for Moonhaven Season 2 because it would be entirely too early for the network to do so after providing a renewal update or before the show’s production had even started. Meanwhile, check out this official trailer for Season 1 below:

Where to stream Moonhaven Season 2?

When available, Moonhaven Season 2, along with Season 1, depending on the viewer’s location and membership plans, will be available to stream on AMC and AMC+. The series is also available to stream by renting or purchasing it on Amazon Prime Video. Users have the option to keep their subscriptions active and watch the series.

The official synopsis of the series states, “A skeptic in Paradise, Earth pilot Bella Sway is sucked into a conspiracy to gain control of Moonhaven, a utopian colony on the Moon 100 years in the future. She must team up with a local detective to stop forces that want to destroy Earth’s last hope before they are destroyed themselves.”

Catch up on the previous season while you wait for more Moonhaven Season 2 updates.