Is Quantum Leap making a comeback to NBC? Continue reading to find out.

Fans of science fiction, set your alarms because we are about to have some fun body-hopping. You won’t have to wait long for the premiere of Quantum Leap on NBC. Look no further if you’re one of those people who wants to learn more about all the recent updates for NBC’s Quantum Leap reboot series. In order to address your concerns, we have gathered all the necessary information regarding the upcoming season. To get all of your answers, continue reading on to the very end.

On May 6, 2022, NBC confirmed the news by sharing a picture of a TheHollywood Reporter article stating that the series has been picked by NBC to premiere on the channel sometime in the fall of 2022. The report states, “Quantum Leap is NBC’s first formal series order of the 2022-23 broadcast season and joins the Night Court reboot on the network’s schedule. The Night Court comedy was ordered to pilot in May 2021 and picked up last September, with the network opting to hold it for next season rather than rush the series — which recast one of its leads — for midseason or summer.”

Take a look at the official announcement on the Twitter handle of NBC Entertainment, simply quoting, “Quantum Leap is returning to NBC.” 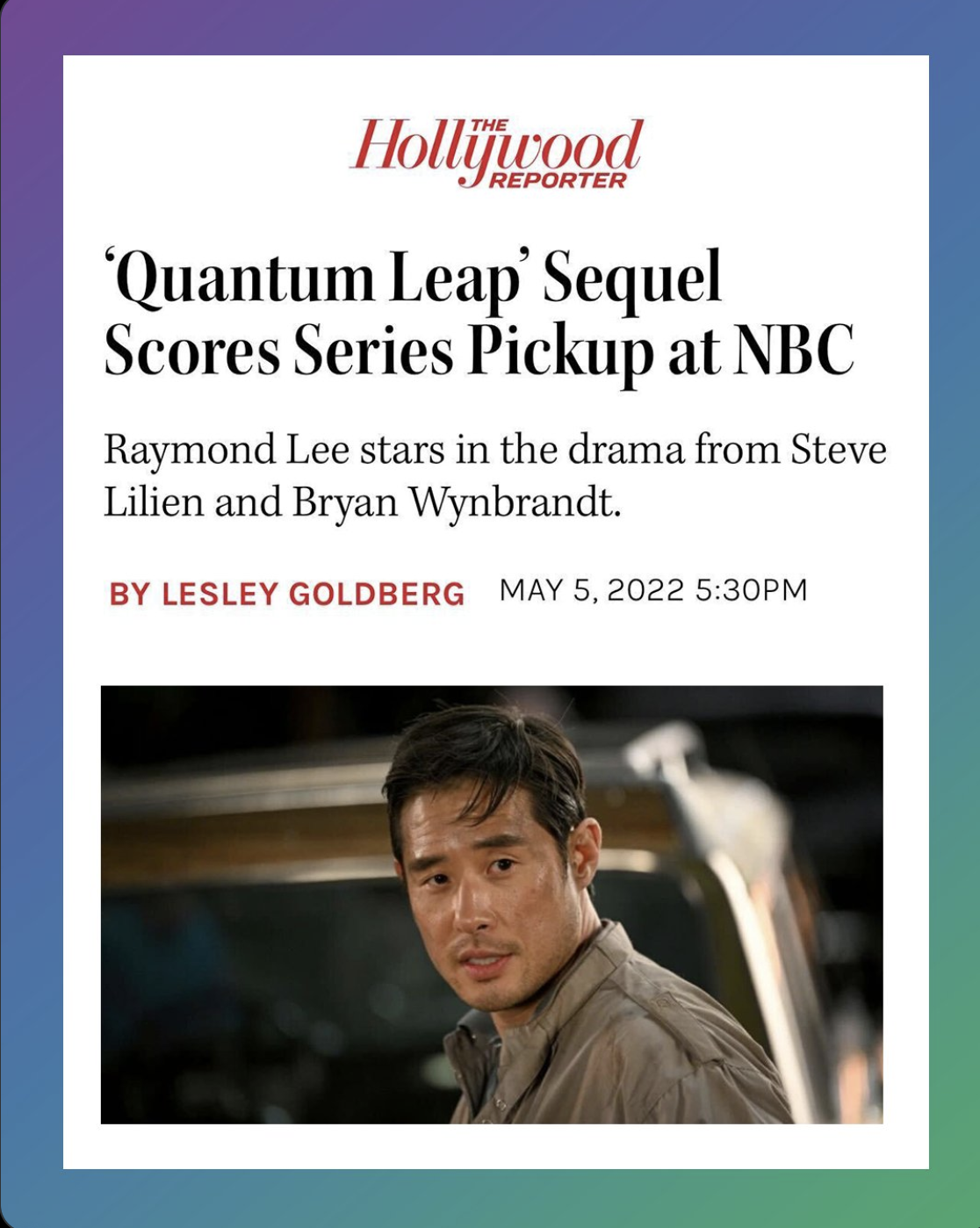 Recent reports also confirmed that NBC’s Quantum Leap Reboot Series will be a part of NBC’s fall lineup for the 2022-2023 TV season. This indicates that it is likely that the upcoming season will return to TV screens sometime around September to October 2022. Take a look at the official announcement below, quoted, “There’s no better season than fall TV season. Here’s what’s coming soon to NBC…”

After weeks of wait, the network has officially confirmed that the series will return this year by disclosing that Quantum Leap will be premiering new episodes on Monday, September 19 at 10 p.m. ET on NBC, directly following The Voice. The official Twitter handle of NBC Entertainment also shared the update among its followers on June 30, 2022. Take a look at the official post below: 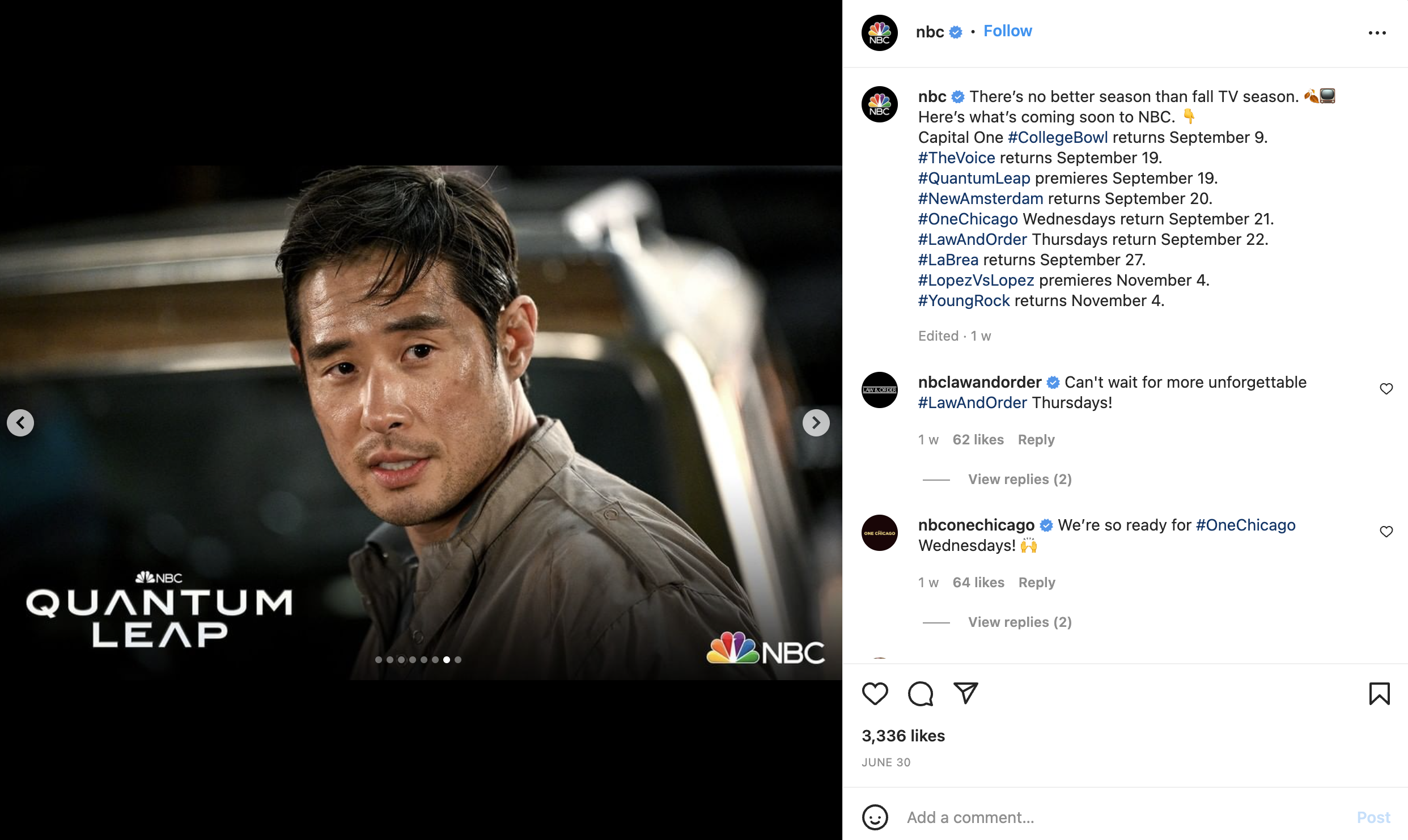 The network updated the logline on Wednesday so that viewers would have a better understanding of the storyline for Raymond Lee’s upcoming Quantum Leap on NBC. The initial logline revealed that it’s “been 30 years since Dr. Sam Beckett stepped into the Quantum Leap accelerator and vanished. Now a new team has been assembled to restart the project in the hopes of understanding the mysteries behind the machine and the man who created it.”

Everything changes, however, when Ben makes an unauthorized leap into the past, leaving the team behind to solve the mystery of why he did it. At Ben’s side throughout his leaps is Addison (Caitlin Bassett), who appears in the form of a hologram only Ben can see and hear. She’s a decorated Army veteran who brings level-headed precision to her job. At the helm of the highly confidential operation is Herbert “Magic” Williams (Ernie Hudson), a no-nonsense career military man who has to answer to his bosses who won’t be happy once they learn about the breach of protocol.

The rest of the team at headquarters includes Ian Wright (Mason Alexander Park), who runs the Artificial Intelligence unit “Ziggy,” and Jenn Chou (Nanrisa Lee), who heads up digital security for the project. As Ben leaps from life to life, putting right what once went wrong, it becomes clear that he and the team are on a thrilling journey. However, Addison, Magic, Ian, and Jenn know that if they are going to solve the mystery of Ben’s leap and bring him home, they must act fast or lose him forever.”

The official press release by NBC states that the original show ran from 1989 to 1993 and told the story of Sam Beckett, a scientist who finds himself trapped in time after a botched experiment, forcing him to leap from body to body. The new Quantum Leap sequel takes place 30 years after Dr. Sam Beckett disappears into the Quantum Leap accelerator and centers around a new character, Dr. Ben Seong, played by Raymond Lee.

Dr. Seong has ultimately been tasked with leading a new team to uncover the mysteries surrounding the original experiment and missing scientist Dr. Sam Beckett. The series will also star Ernie Hudson, Caitlin Bassett, Nanrisa Lee, and Mason Alexander Park. Fans of the original Quantum Leap are in for a few surprises, including the return of some original characters and the continuation of the most popular plot points. Hudson, known for his role in the HBO series Oz, plays Herbert “Magic” Williams, a character introduced in Season 3 of the original show. As a Vietnam War veteran, Magic utilizes his strategic military and political negotiation tactics to keep the Quantum Leap Project moving forward.

The new series also reimagines Admiral Al Calavicci as Addison, another important member of the Quantum Leap team who maintains communication with anyone on an active time-travel mission. Star Trek: Picard actor Nanrisa Lee is slated to play Jenn, the head of security for the highly-classified project, and Cowboy Bebop actor Mason Alexander Park is taking on the role of Ian, the lead architect for Quantum Leap’s A.I. technology.

Written and executive produced by Steven Lilien and Bryan Wynbrandt and executive produced by Martin Gero as well as Quantum Leap creator/EP Don Bellisario and EP/co-narrator Deborah Pratt, the follow-up series is set in the present day. It’s been 30 years since Dr. Sam Beckett stepped into the Quantum Leap accelerator and vanished. Now a new team has been assembled to restart the project in the hopes of understanding the mysteries behind the machine and the man who created it.

The series is produced by Universal Television, a division of Universal Studio Group, with Lilien and Wynbrandt exec producing for their I Have an Idea! Entertainment, Bellisario for his Belisarius Productions, and Gero via his Quinn’s House Productions.

Though the exact plotlines for the upcoming episodes are yet to be disclosed by the creators. The fans have speculated that like the previous original series, Quantum Leap is expected to contain at least 20-22 episodes. As of July 11, 2022, the specific episode names and plot summaries for the series cannot be confirmed. Hence, we advise the viewers to wait for a while because NBC will confirm these details as the launch date approaches in the month of September.

Where to stream Quantum Leap?

When released the entire season of Quantum Leap will air on NBC and later be available to watch on the official website based on the user’s location. Moreover, it is speculated that the viewers can also catch up with all the episodes of the series on Peacock, Hulu Plus, and fuboTV just like the majority of NBC shows.

Quantum Leap is also suggested to be available for renting or purchasing on Vudu or Amazon Instant Video, with a vast number of membership plans according to the preference of the users. Moreover, the series is also available to watch exclusively on NBC’s official website for free where the episodes are published after they air on the TV channel.

While you wait for more Quantum Leap updates watch the original series to get an idea of the show.