The Mighty Ones Season 4: When will the new season premiere?

Is The Mighty Ones Season 4 expected to release in 2022 or not? Continue reading to find out.

If you are looking for something new in the animated genre then this is the perfect show for you! Additionally, after the events of the last season, the fans of this television series are now wondering what happens next in the series. So especially for you, we’ve compiled a quick rundown of everything you need to know about the latest details, including the official release date, plot, and cast, so you can get excited about the next chapter and be ready before the series airs on the streaming service.

Here’s everything we know so far about The Mighty Ones Season 4.

The Mighty Ones Season 4: When will the new episodes premiere?

The fourth and final season will premiere all the brand-new episodes on Friday, December 9, 2022, at the time slot of 12:01 AM–12:30 AM EST on Hulu and Peacock like other original shows. In order to receive updates on when The Mighty Ones premieres on streaming services, interested viewers can also enable notifications.

Moreover, the official Twitter handle of Dream Works TV also confirmed the news by sharing a short clip from the trailer, quoting, “Get ready to launch! The mighty epic final season of #TheMightyOnes is coming to @hulu & @peacock on December 9th!” Take a look at the official post below:

Get ready to launch! 🚀
The mighty epic final season of #TheMightyOnes is coming to @hulu & @peacock on December 9th! pic.twitter.com/StFKHp1yLR

The Mighty Ones Season 4 Plot

The misadventures of “The Mighty Ones,” continue as they explore their backyard wonderland and learn more about the strange creatures they share it with. A flood forces the Mighty Ones to live as pirates searching for dry land, Rocksy dabbles in a home makeover, and Very Berry makes a new feathery “friend” who may or may not see her as food. These mighty little beings are relatively fearless, a little misguided, and always have each others’ backs come snow, wind, or any atmospheric phenomenon that threatens the yard they call home.

The official description of the series for the fourth season as per Hulu states, “The Mighty Ones once again find themselves in uncharted territory as they continue to discover unexplored areas of the yard. Twig must fight for his life in a Gladiator Pit after being accidentally discarded into a compost bin. The group embarks on an epic quest to find something called a cup. Leaf struggles to find a decent pair of pants. And when they decide to launch themselves into outer space, they become stuck in the heavens (really, a light bulb).” 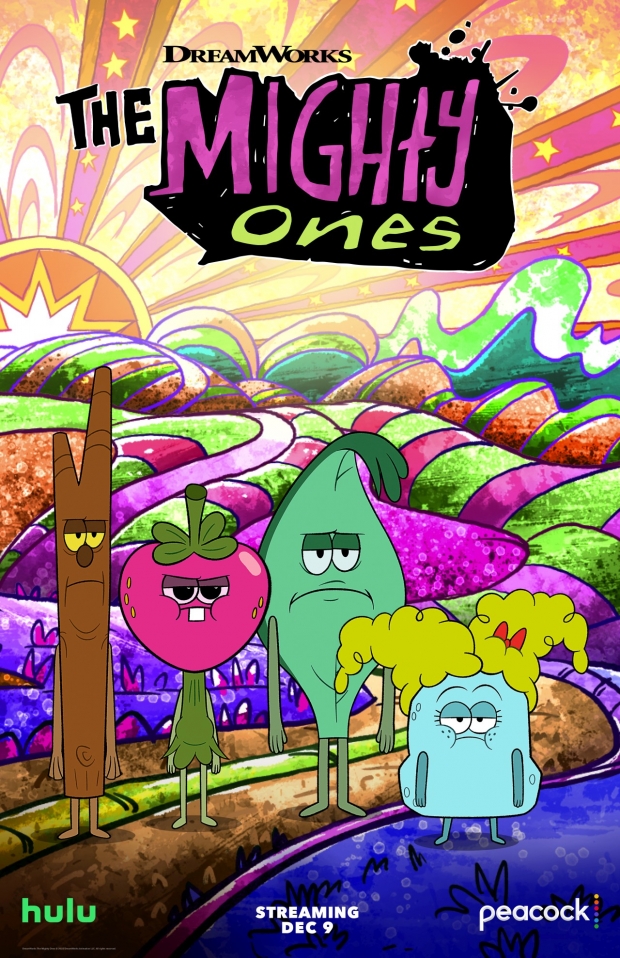 The Mighty Ones Season 4 Cast and Crew

The Mighty Ones is an animated television series produced by DreamWorks Animation Television and created by Sunil Hall and Lynne Naylor. The main cast members of the series who will reprise their roles are as follows Josh Brener as Twig, Jessica McKenna as Rocksy & Tim, Jimmy Tatro as Bucky “Leaf,” Alex Cazares as Verry Berry, Janina Gavankar as Kensington, Grey Griffin as Samosa & Percy the Pear.

The Mighty Ones Season 4 Episodes and Streaming Options

The upcoming series is expected to have at least a total of 10 episodes with an average runtime of 11 minutes, which will drop at once, so you can stream the series without waiting on a weekly basis! On the other hand, the episode titles and synopsis of the series are not released by the network as of November 24, 2022. The network will publish those details when the episodes are due to air on the streaming service. So, we would advise fans to be patient while waiting for these updates, which will be issued in the coming months.

When released, you can watch The Mighty Ones Season 4 exclusively on Hulu and Peacock. On Hulu (With Ads) for $1.99/month for a year and add Disney+ (No Ads) for $2.99/month more. The prior seasons of the series are also available to stream on the respective platforms. The members of the streaming platform have options to choose from a number of plans based on a monthly or yearly basis, which the users can opt for as per their preferences, which allows viewers to watch new series and movies based on location when the content is available to air worldwide.

The Mighty Ones Season 3: A Quick Recap

After being stuck inside a snake, the Mighty Ones escape finding the yard that was their home has changed forever. A trendy new couple has moved into the house and transformed the backyard into a hipster paradise. As these four best friends try to navigate this strange new land, they find themselves up against suburbia’s biggest threats; lawnmowers, garden gnomes, leaf blowers, and worst of all…a baby!

Episode 1: Rude-A-Snakening; Afteryard: After getting stuck inside a snake, the Mighty Ones escape, but the yard that was their home has become a much more hostile environment; the newly renovated yard is inhospitable, but the Mighty Ones find a paradise.

Episode 2: Too Many Bens!; Dance of the Machines: A lack of predators in the new yard has led to an infestation of Bens, and they are looking for playmates; the new humans that live in the house notice there’s dirt in their yard, so they release a cleaning robot that becomes a deadly menace.

Episode 3: Fleshbeast; Time Leafer: The Mighty Ones are terrorized by the human baby that runs amok through the yard, but Rocksy is drawn to its power; everyone thinks Leaf has become loopy, but his theories about time travel might just be what the Mighty Ones need.

Episode 4: Clickety Clacks; Rocksy’s Thing: Rocksy’s “talent” goes to her head when she and Berry accidentally invent tap dancing; Rocksy finds one end of a shoelace and tasks her friends with helping her free it so she can have a thing of her very own.

Episode 5: Twig Tat; The Gnome: After getting advice from the Yard Tree, Twig gets a tattoo carve and keeps getting more, but ends up going too far; upon finding a giant, offensive garden gnome, the Mighty Ones debate whether to destroy it or consider it art.

Episode 6: Gherkin Returns; This Blows: The fifth Mighty One, Gherkin, visits for the weekend, but Berry is perplexed to discover that he has changed; the Mighty Ones get stuck in a vortex created by a leaf blower war between neighbors.

Episode 7: Big Busyness; Foam Party: When Leaf meets an ambitious Coffee Bean, he learns the highs and lows of business; everyone is mad at Rocksy, so she tries to make it up to them by creating fun foam to play in.

Episode 8: The Ripening; Maraca Rock: Berry is invited to her family’s annual celebration, which she finds tedious, but the Mighty Ones are excited to join; Rocksy swaps lives with a maraca bead for the day.

Episode 9: The Night Pig; Twigula: Kensington is terrorized by her overactive imagination when a possum comes into the yard and tangles with the Mighty Ones; Berry mistakenly thinks that Twig is a juice sucker and tries to convince him to make her into one too.

Episode 10: Mystery! On The Yard Express; Lindsay Joins The Band: While passengers aboard a fancy train, the Mighty Ones become part of a classic whodunit; with an impending visit from Breht’s mother, Lindsay discovers she has more fun with her next-door neighbors.

Let us know in the comments if you will be streaming The Mighty Ones Season 4 on Hulu next month.