Welcome to Chippendales: When is it premiering on Hulu?

Is the series expected to premiere on Hulu in 2022 or not? Continue reading to find out.

Welcome to Chippendales is an upcoming American drama streaming television miniseries created by Robert Siegel and inspired by the book Deadly Dance: The Chippendales Murders by K. Scot Macdonald and Patrick MontesDeOca. If you have observed Hulu has given us a lot of fresh stuff this year and as the year ends in a month it does not appear to be slowing down anytime soon, as this month is also full of surprises, with exclusive TV shows and movies all slated to release in a few days.

Hulu’s catalog competes with some of the major competitors, including Disney+ and Apple TV+, and they are doing an excellent job of keeping up with fresh topics and characters that are meaningful to subscribers. Hence, Welcome to Chippendales is one of the newest entries that has received a lot of attention in recent months. So, we’ve put together a concise summary of all the details you need to know about the release date, plot, and cast so that you may get a head start and be prepared before the series airs.

Here is everything we know about Hulu’s Welcome to Chippendales.

The network has officially confirmed that the brand-new series is set to premiere on Tuesday, November 22, 2022, at the time slot of 12:00 a.m. (PT) the morning of the release date, with the first two episodes dropping on the same day and the following episodes expected to drop on a weekly basis until the finale on January 3, 2023.

The official Twitter handle of Welcome to Chippendales also confirmed the news by sharing the official release date among its followers, quoting, “Ready to bare all? Here’s the official trailer for #WelcometoChippendales, coming to Hulu on November 22. this tweet to be reminded when new episodes drop.” Take a look at the official post below:

Ready to bare all? Here's the official trailer for #WelcometoChippendales, coming to Hulu on November 22.

💚 this tweet to be reminded when new episodes drop. pic.twitter.com/r6bLs2FIZg

The story of Indian immigrant Somen “Steve” Banerjee who becomes the unlikely founder of a male revue that becomes a cultural phenomenon. The official description of the series as per Hulu, states, “A sprawling true-crime saga, “Welcome to Chippendales” tells the outrageous story of Somen “Steve” Banerjee, an Indian immigrant who became the unlikely founder of the world’s greatest male-stripping empire – and let nothing stand in his way in the process.” Take a look at some exclusive stills below:

Welcome to Chippendales Cast and Crew

The main cast members of the series are as follows: Kumail Nanjiani as Somen ‘Steve’ Banerjee, Murray Bartlett as Nick De Noia, Annaleigh Ashford as Irene, Dan Stevens as Paul Snider, and Juliette Lewis as Denise. The recurring cast members of the series are Quentin Plair as Otis, Andrew Rannells, Robin de Jesús as Ray Colon, and Spencer Boldman as Lance McCrae. The guest star cast includes Nicola Peltz as Dorothy Stratten while Philip Shahbaz takes over as Peter Bogdanovich.

Pam & Tommy creator Robert Siegel and Nanjiani executive produce alongside Dylan Sellers, Jenni Konner, Matt Shakman, Emily V. Gordon, Nora Silver, and Rajiv Joseph, who wrote the series along with Mehar Sethi. Siegel and Konner are co-showrunners and Shakman directs. Jacqui Rivera is the co-executive producer and Annie Wyman is a co-producer. As it was reported back in February 2022, it was announced Matt Shakman would replace Bahrani as director and executive producer.

The upcoming mini-series has a total of 8 episodes, and the first two episode titles and synopsis gives us a little insight into the plot. We’d also like to point out that, as of November 16, 2022, the exact titles for the remaining episodes cannot be confirmed.

The network will publish those details when the episodes are due to air on the streaming service. So, we would advise fans to be patient while waiting for these updates, which will be issued in the coming weeks. We’ve put together a complete episode guide to help you understand the order below:

Episode 1: An Elegant, Exclusive Atmosphere – November 22, 2022: The episode is directed by Matt Shakma teleplay of the episode is written by Robert Siegel. In the episode, Indian immigrant Somen “Steve” Banerjee spends his days working at a gas station and his nights dreaming of being the next Hugh Hefner. A chance encounter with a Playboy centerfold and her slick promoter husband sends him and his business plan in an unexpected new direction.

Episode 2: Four Geniuses – November 22, 2022: The teleplay of the episode is written by Robert Siegel. In the episode, as Chippendales takes flight, Steve assembles his dream team – including a shy accountant who may be more than just a business hire.

Episode 3: TBA – November 29, 2022: The teleplay of the episode is written by Rajiv Joseph

Episode 4: TBA – December 6, 2022:  The teleplay of the episode is written by Annie Julia Wyman

Episode 5: TBA – December 13, 2022: The teleplay of the episode is written by Jacqui Rivera

Episode 6: TBA – December 20, 2022: The teleplay of the episode is written by Annie Julia Wyman

Episode 7: TBA – December 27, 2022: The teleplay of the episode is written by Jenni Konner

Episode 8: TBA – January 3, 2023: The teleplay of the episode is written by Rajiv Joseph & Robert Siegel

When released, you can watch Welcome to Chippendales exclusively on Hulu with plans starting at $7.99/month along with Disney+ Internationally, and Star+ in Latin America. The viewers can buy a subscription plan according to their preference which allows viewers to watch new episodes based on location when the episode airs worldwide. Moreover, take a look at the official poster below: 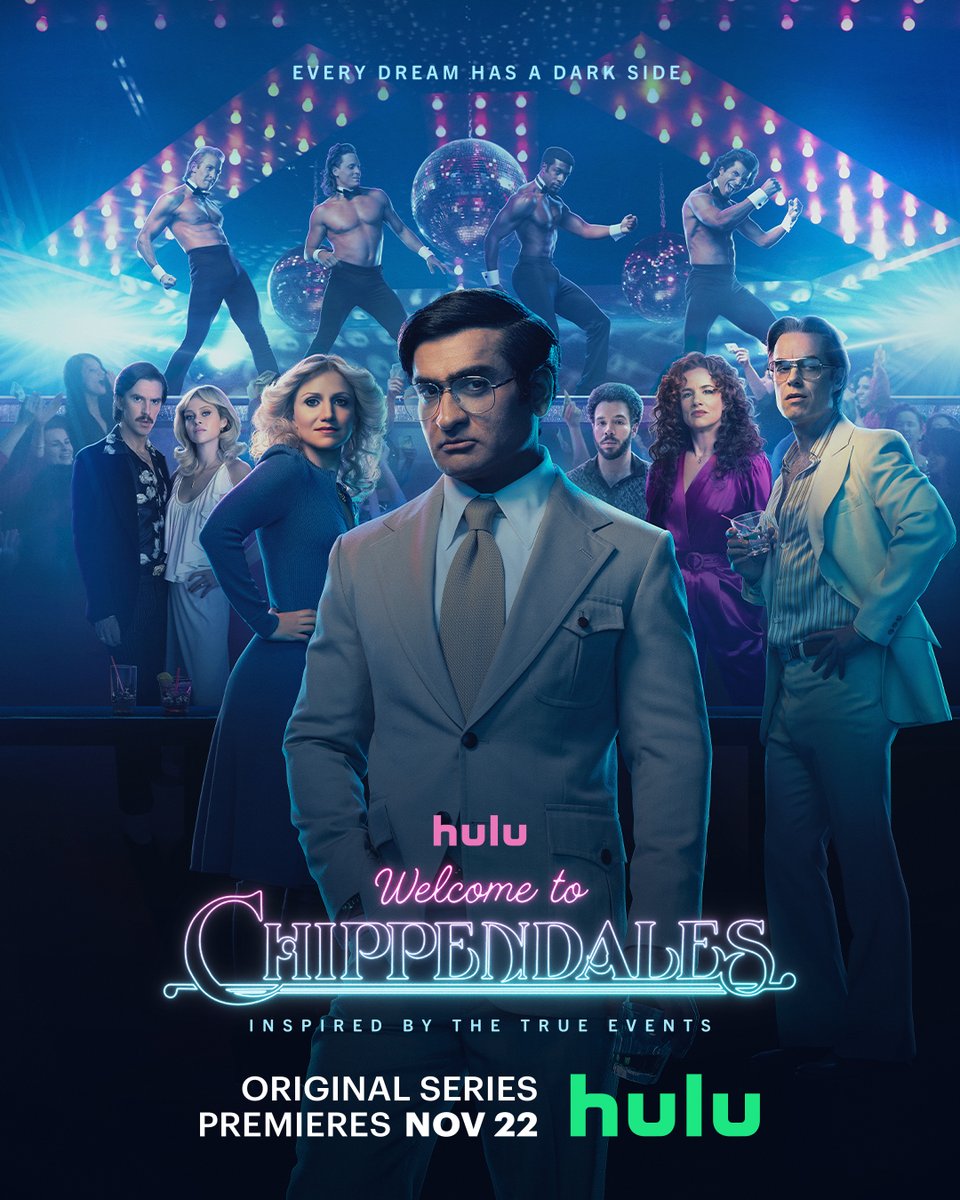 The official trailer of 2:06 minutes was released on October 18, 2022, with a tagline, stating, “Every dream has a dark side. #WelcometoChippendales premieres November 22 on @hulu, Disney+ Internationally, and Star+ in Latin America. A sprawling true-crime saga, Welcome To Chippendales tells the outrageous story of Somen “Steve” Banerjee, an Indian immigrant who became the unlikely founder of the world’s greatest male-stripping empire – and let nothing stand in his way in the process.” Take a look at the official trailer on Hulu’s YouTube channel below:

Let us know in the comments if you will be streaming Welcome to Chippendales this month or not.