Costs only 10 thousand and earns in millions! Benefits of taking food processing training

Balwinder Kaur of Bathinda, Punjab started her food startup- Zebra Smart Foods for just Rs 10,000 and today she is earning Rs 1 lakh every month from it.

“There is no fixed age to start something new. It is better to sit at home than to learn something and work on building an identity. ” This is to say that of Punjab’s women entrepreneur Balwinder Kaur Sidhu. 52-year-old Balwinder Kaur holds her own food startup in Bhatinda, Punjab – Zebra Smart Foods running. Through which she delivers food products like pickle, chutney, marmalade, multigrain flour, squash and biscuits to the customers. Their healthy and tasty dishes, made with chemical-free methods at home, are also in demand in cities such as Gurugram and Noida outside Punjab.

The most interesting thing is that Balwinder started his business from his home in 2018. For nearly two years, after working hard day and night from home, he also started his small shop in the city in February 2020. Today, not only do people buy dishes for their homes, but many people buy more and sell things in front of them. In this way, Balwinder Kaur’s business is not only giving her an identity but is also becoming a means of good employment for many people.

Balwinder Kaur told The Better India about her journey in detail, “I have done MA in Punjabi subject. After marriage, the responsibilities of household and family never came, so never did the job. But, there was always a desire to start a business of our own. ”

Balwinder Kaur never wanted to sit vacantly. Therefore, she kept trying to do something from her home. First, he started ‘Paying Guest / PG’ work in his home. However, he stopped this work within a few years. Because there were many problems with it. After this, he thought of working as a boutique or beautician. She also underwent beautician training. But, she never progressed in this sector because her passion was something else.

She explains, “I have always been interested in making different types of pickles, jam, etc. I had always seen my grandmother and mother in the house making many pickles according to the season. Sometimes sour pickles, sometimes sweet and sometimes sour-sweet. I had learned to make different types of pickles from them. Everyone likes my hand made things even in my in-laws’ house. ” Due to his passion for cooking, Balvinder participated in a training program of the Punjab Agricultural University.

He told, “There we were trained to make pickles and chutneys. Everything was taught in the university through a process so that every dish we cook, its taste and nutrition remain intact. The training encouraged me and a lot of new things were also learned. ”

After taking pickle and chutney training from Punjab Agricultural University, he also took training in fruit squash and sorbet from Krishi Vigyan Kendra. She says that she started making pickles for her family. Everyone liked their pickle made so much that people started ordering them. Generally, people do not forget to order them when they taste their pickle. After the backlash from the people, Balwinder’s confidence in himself grew and he considered giving this business a chance.

In the year 2018, he started his business with a mere 10 thousand rupees. She explains, “I started work on a small scale and used to do everything from my home. I used to come to cook many dishes, but to run a business, more skills are needed. In which Dr Gurpreet Kaur Dhillon helped me a lot. I have been able to move forward only under his guidance. ”

Dr Gurpreet Kaur Dhillon is appointed as Assistant Food Technologist at Regional Station, Bhatinda, Punjab Agricultural University. The objective of this centre is to make farmers, women and young people self-reliant by giving them food processing training. Dr Gurpreet says, “This centre was started specifically with the aim to help farmers and women. We provide different types of training, in which anyone can participate. After training, if someone wants to start their work, we also help them. Like – we have helped Balvinder Ji in licensing, packaging and marketing etc. ”

She further said that Balwinder is very hardworking and not only has she started her own business but she is also employing 10 women. He added, “Our aim is to enable people. We ourselves tell the story of a businesswoman like Balwinder to people so that they too can be inspired. So, if anyone wants to get ahead in the field of food processing, feel free to contact us. ”

Makes about 30 types of dishes:

Even though Balwinder Kaur made her debut with pickles and chutneys, today she is making many more dishes. Talking about pickles, she makes pickles of seasonal fruits and vegetables like mango, lemon, amla, chilli, radish, carrot etc. She also makes Amla candy and marmalade. Also, you can buy apple marmalade from them. Apart from squash of mango and guava, she also makes sorbet of apple, lychee, rose etc. 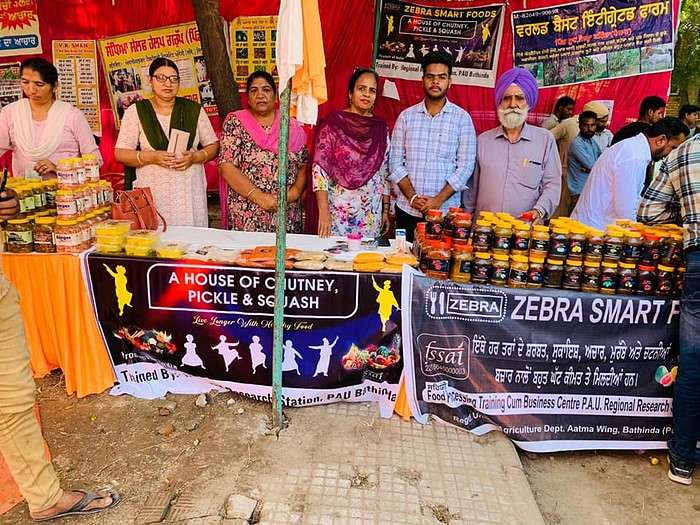 Apart from this, he has also started making ‘multigrain flour’ by mixing ragi, millet, Kodo, jowar, gram etc. This flour is better than normal wheat flour, especially for patients with diabetes. Similarly, she is also making gluten-free flour and biscuits available to customers. She explains, “We have started making most of the things on the demand of the customers. As our customers grew, the scale and menu of our work also increased. Many people get allergic to the ‘gluten’ present in wheat, therefore, we have also started making fibre-rich and gluten-free flour and biscuits. ”

He has marketed his business mostly through WhatsApp and Facebook. Apart from this, she has also set up stalls in ‘agricultural fairs’ or ‘organic fairs’ held at different places many times. He had set up a stall at an organic fair in Delhi and got many customers from Gurugram and Noida. Before the lockdown, his dishes were reaching Gurugram and Noida. However, at present, his work is limited to Punjab only.

In addition to fulfilling orders from about 250 customers every month, she also delivers products to several resellers. Gurvinder Singh, a reseller who sells his pickles, marmalades, to customers further, says that he started buying goods from them at the beginning of 2021. Among all their customers, there is a high demand for dishes made by Balwinder. Because their dishes are made in organic ways and are much better than other dishes found in the market. Therefore, he is also satisfied now that he is giving good things to customers and earning well.

Balwinder says that she earns up to one lakh rupees a month from her business. He says that his business has grown in the last three years and today he has also set up his shop in the city. In the coming few years she wants to spread her business across India. For this, she is also working hard so that she can set up a processing unit of her own and employ more and more people.